An Alchemy That Makes You Wonder

The second Quiet Lights festival took place in Cork at the weekend. Don O’Mahony attends a selection of concerts including Caimin Gilmore, Lōwli, Lemoncello and Rosa Nutty on Saturday, and Junior Brother and Rozi Plain on Sunday.

Now in its second year, Cork’s Quiet Lights (22–24 Nov.) presents itself as a small winter festival celebrating the new wave of Irish and international folk, traditional and experimental talent. Unsurprisingly, given the explosion in recent years of Irish artists whose work traverses those boundaries, this small festival run by founder Jon Pearson is packed with domestic talent, and this year’s line-up built itself around such leading lights of Ireland’s contemporary folk scene as Lankum and Ye Vagabonds. Around that is a constellation of artists such as Anna Mieke, rising star Maija Sofia, and Junior Brother. The presence of music documentarian Myles O’Reilly as the festival’s ‘featured artist’ lends a crystalising effect to proceedings as he has worked with so many of the artists featured.

The second day of the festival saw the world premiere of four pieces for double bass. The night before, double bassist Caimin Gilmore appeared at the festival helming his chamber folk outfit Sun Collective, but here he was more in the modern composition world familiar to him as a member of Crash Ensemble.

Gilmore commissioned four of Ireland’s most exciting composers to write four new solo double bass pieces and the results were predictably distinct and diverse. Performed in the arresting surroundings of the Canova Room of the Crawford Art Gallery, a space populated by marble statues and plaster casts, Gilmore opened with local composer Linda Buckley’s Seancheann, a tribute to her home area of the Old Head of Kinsale. Sonically the piece appeared to point at something overarching and wondrous but as you delved deeper into the diaphanous drones provided by tape and Gilmore’s gentle rhythmic playing the piece seemed to contain a creeping sense of unsteadiness, as if the ground could collapse beneath our feet. Benedict Schlepper-Connolly’s Blackberry, for double bass and resonator, is a quieter, mournful piece, sparsely played with longer sustaining notes, suggesting an aftermath of something.

Nick Roth’s Arris for solo double bass was the most visceral piece. Exploring the Irish Ogham script, intersecting with painter John Noel Smith’s concept of Ogham as ‘visual rhythm’, the piece saw Gilmore wrestle with his instrument, producing sounds that alternated between the low grumble of a giant ocean liner’s foghorn to more resonating see-saw notes affected by Gilmore’s near constant manipulation of the machine heads or tuners of his double bass. The Ogham concept realised in the moments he’d strike at the instrument with his bow, as if to imprint the dent or a dash of a symbolic grammar. It resonated with the tableaux of petrified marble cast figures, particularly the fearsome ‘Laocoön and His Sons,’ an agonising depiction of people being attacked by serpents.

The performance closed with <3 by another local composer, Sam Perkin. It saw Gilmore accompanied by Kate Ellis on cello while on tape an ambient soundscape of shimmering notes, gurgling babies and laughing infants played out. In tandem, Ellis and Gilmore built up little passages comprising simple methodical riffs. I scanned the room for a cherub amongst the statues. It was in vain, but <3 on its own sufficed in manifesting such playful figures. 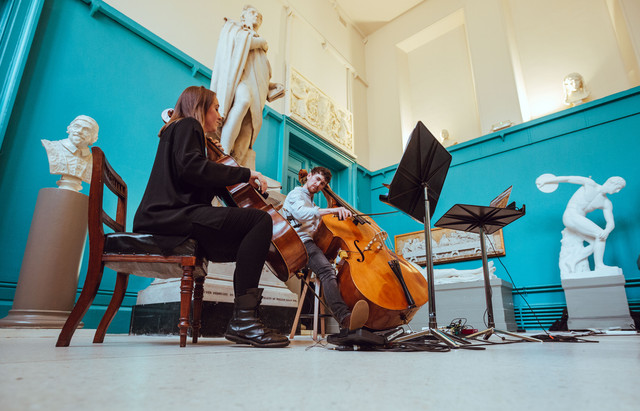 Rougher around the edges, and delightfully so, were acoustic guitar and cello duo Lemoncello. There’s something intoxicating about the way Laura Quirke and Claire Kinsella’s voices don’t mesh fully on new song ‘House of Cards’. An endearing messiness that’s both ramshackle and sassy. By the time they close with ‘Mantlepiece’ from their Stuck Upon the Staircase EP the audience, truly smitten, are spontaneously singing its charming chorus of ‘life is sweet’.

Earlier in the evening Rosa Nutty took to the stage with just her electric guitar. Nutty’s music has been described as minimal, but on record her songs revel in the space between other instruments such as drums and keyboards. Here, we learned the real meaning of minimalism. Despite, or perhaps more accurately because of the similarity of the songs, her seven-song set has a cumulative power. The overall effect is like hearing the extended fade out of pop songs through the walls of the room next door. Gentle and wispy they may be, but they certainly swing.

Among her own compositions is a poem by Louis MacNeice, ‘Snow.’ Apart from the words this song is barely there, hanging like a ghost on a white landscape. In the context of everything that has gone before the words ‘This is a song by Tame Impala’ sounds remarkably improbable, given the Australian psychedelic rock combo’s expansive, high-production value sound, yet Nutty makes her version of ‘Yes I’m Changing’ her own.

Nothing typical
I arrive at Junior Brother at the Kino on Sunday to catch support act John Francis Flynn. The previous night he was opening for Lankum at Live at St Luke’s and as he reached the climax of his set he was brewing up a storm with accompanying musician Ross Chaney on drums and electronics. He ends with the more typical folk number ‘Walking in the Dew’.

There is nothing typical about Junior Brother. The musical alter ego of Killarney’s Ronan Kealy, his songs evoke the mad, bad and dangerous to know of rural life. His lyrics capture a phantasmagoia of drunken escapades, snack-box-smeared lips, earthy smells, whiskey sweats and lunar reflections on lonely lakes. A self-declared fan of American post-rock Godhead Slint, some of his set’s highlights feature moments that feel indebted to the legendary quartet. ‘Big House’ is a shock to the senses, a demented dark cartoon strip of dark images. ‘Girth & Plain’ features an intricate interplay between Kealy and mandolin player Tony McLoughlin. On ‘The Back of Her’ the meandering, rambling passage of playing on record sounds like it’s replaced by a combination of Planxty and Led Zeppelin, making the final plaintive musings sound all the more starkly magnified.

New song ‘This Is My Body Now’, a body positive paean that features the immortal couplet, ‘My clothes are on the floor, there’s no hiding anymore, is the most gentle and wistful song of the night, optimistic even. Another new track, ‘No Snitch’, allegedly about swimming in south county Dublin and containing the amusing observation that ‘God knows lots of things but God’s no snitch’, tickles, but it’s the repeated coda of ‘I’ll hate you forever’ that undercuts and devastatingly sours the song’s bonhomie. It’s a declaration that would be amusing if it didn’t feel so pathetic.

The festival comes to a close in the company of Rozi Plain at Coughlan’s. Playing a set loaded with songs from her recent album What A Boost, Rozi’s quintet of guitar, electric banjo, bass, drums and keys delivers a glorious sound. There’s so much going on within the songs, so many tiny delicious things, it’s like listening to the purring engine of a finely tuned luxury car and opening the hood to find its powered by kittens manipulating cranks and pulleys.

There’s an intimacy to this performance that goes beyond Rozi’s hushed vocals and the cosy confines of Coughlan’s and resides in music that sounds like it’s played with plucky defiance by magical creatures, music that communicates a childlike wonder, but it’s a shared covenant, the collective conspiracy of music and audience meshing as one. Her breath becoming ours, an alchemy that makes you wonder, in the words of ‘Swing Shut’, who’s haunting who?

It’s the last night of their tour and they end with their version of avant-garde jazz pioneer Sun Ra’s ‘When There is No Sun.’ It was an eminently satisfying end to the weekend, a mellow lullaby to see us off into the night, some sun to light the way: a quiet light from the mouth of infinity.

Lankum Win RTÉ Choice Music Prize Album of the Year
The prize was awarded to Lankum for their third album 'The Livelong Day' at Vicar Street (5 March).