This first full recording of Ciarán Farrell’s offers ample evidence of a productive first decade a jobbing composer, showcasing as it does a vital, fast-maturing voice distinguished by melodic and harmonic fluency and an appreciable facility for writing music that communicates with a clear directness of intent.

It says something about Farrell’s fastidious approach to composition and his constant questing for apposite form and appropriate gesture that all five pieces featured here exist in more than one version.

Originally commissioned by Irish Modern Dance as a duo for violin and cello, the title work Perfect State benefits from the loss of a second slow section and the richer sonorities afforded by a bank of eight violins and four cellos with newly added underpinning from a brace of double basses. The darkly radiant beauty of the introductory Samuel Barber-like prelude gives way to a fleetly-realised movement full of incident, colour and vibrant interplay between the separate instrumental timbres that is altogether infectious.

First composed in 1996, The Shannon Suite is the earliest piece here, although this arrangement for soprano saxophone and guitar was made by Gerard McChrystal as recently as last year and has already been heard on Pluck Bow, his duo recording with guitarist Craig Ogden (reviewed in JMI Mar-Apr). Both soloists are re-united for a more assured and nuanced reading, one that has a fresher, more agreeably lived-in quality and greater reciprocity. It benefits, too, from a cleaner, better balanced and framed recording.

McChrystal makes a second appearance, alongside The Smith Quartet, on The Pilgrim’s Return, a sunny celebration of home-coming influenced by Bulgarian and Greek music and discreetly dappled with enough Irish references to root the piece in a pleasingly recognisable Elysium.

There’s also a likable touch of the exotic on display in Around and About, a portrait-cum-meditation on the late Tyrone Guthrie’s County Monaghan home and now artists’ retreat, Annaghmakerrig. In its fourth incarnation, the three-movement work assumes the shape of a 10-minute dialogue between flute and vibraphone, each loose- and long-limbed in equal measure with a diaphanous quality in the flute line and a charming playful mischievousness in the quixotic spiralling interplay of the vibraphone (the composer’s sister Sinéad Farrell and Roger Moffatt on ebullient form).

The disc’s undoubted highlight is the 35-minute setting of Paddy Bushe’s poem Hopkins on Skellig Michael. A monumental work in eight movements, each a clenched fist full of ideas punching into the imagination, it is an accomplished, magnificent and mature work and is dramatically realised by the RTÉ Concert Orchestra under David Brophy’s tightly-managed conducting and Barry Govern’s memorable, granite-edged reading of Bushe’s rough-hewn but intrinsically-musical text.

In all, a varied and variously entertaining introduction to a bright young talent with strong performances, all superbly recorded, throughout. 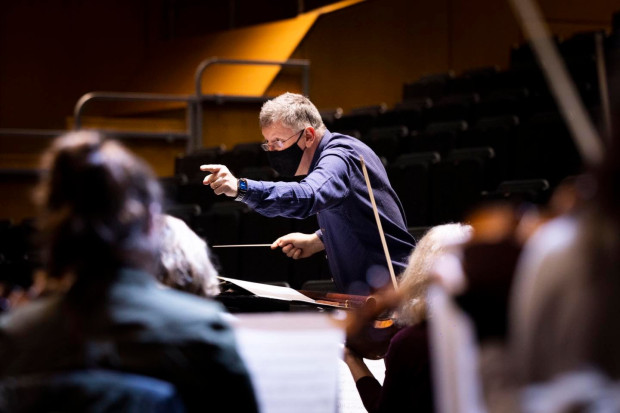