In the second review from our new Traditional Music Writer Mentoring Scheme, supported by the Arts Council, Sadhbh O'Sullivan reviews Daoirí Farrell at Temple Bar TradFest, a concert in which he was joined by a range of artists including Seán Keane of the Chieftains.

It is a characteristically dull January evening when I board a bus from Kildare for the annual Temple Bar Tradfest in Dublin City. Having long since spread its wings beyond the boundaries of Temple Bar, the festival now spans five days, dotting the city with musical events that light up the January gloom like a twinkling constellation in a dark sky. On this occasion, Daoirí Farrell has gathered an all-star cast to join him onstage at Dublin Castle for ‘The Dublin Session’, a celebration of songs and tunes inspired by his hometown. I arrive ten minutes before doors open and the queue already stretches outwards and down the steps.

When Farrell unceremoniously arrives onstage, he briefly introduces his band and invites us all to ‘have a bit of a laugh at my expense’. He opens with Liam Weldon’s ‘Blue Tar Road’, and I imagine it is no accident that he has chosen to launch the night with an expansive melody that acts as a springboard from which his limber voice can take flight. Sean Potts’ droning uilleann pipes and Sean Óg Graham’s subtle guitar effects linger underneath, enveloping the lyrics in the warmth that the protagonist of the tale yearns for: ‘Though few men give me camping space, and few call me friend / Oh the hard road for a travelling man I must travel until the end.’

Farrell then takes a seat with his bouzouki and the pace quickens, with renditions of ‘If You Ever Go to Dublin Town’ and ‘The Zoological Gardens’ propelling his band into action. We are treated to three special guest appearances; the first is from Seán Keane of the Chieftains, who plays alongside fellow fiddler Kevin Glackin for the entirety of the show, but who demonstrates his agility with a sprightly performance of ‘Doctor Gilbert’ and ‘Colonel Frazer’.

Contrasting tones
Next up is Cathy Davey, whose two original numbers don’t break the flow despite the stylistic disparity between her songwriting and that of the traditional songs. ‘In He Comes’ is a pleasant surprise, elevated as it is to somewhere new with tasteful flourishes from the bouzouki, while ‘Little Red’ is particularly complimented byRobbie Walsh’s pulsating bodhrán and Paddy Kiernan’s embellishments on the banjo. Her version of ‘The Foggy Dew’, on which she duets with Farrell, is guttural and velveteen all at once. My only regret is that the pair don’t sing together more throughout the song; these are two equally distinct voices and I crave more opportunity to bask in their contrasting tones.

The final special guest is Caoimhe Hogarty, a vocalist who Farrell met while studying music in Ballyfermot College. ‘Rosemary Bells’ is a personal highlight for me; Hogarty’s apparent joy at joining him on stage is infectious and her heartily sung verses are punctuated with beautiful interplay between the string instruments.

Memorable moments
Some of the most memorable moments of the evening are those that invite you to lean in and be carried away on the crest of Farrell’s far-reaching, melismatic vocal. ‘Blue Tar Road’ and ‘Via Extasia’ are fine examples of this (he tells us he wrote a thesis on Liam Weldon). Another highlight, and one which weaves an essential thread through the fabric of the performance, is the exquisitely understated guitar playing of Sean Óg Graham.

Admittedly, there are times when I can’t help but feel that this type of venue – a function room – is simply not the place for performances like this. However, any formality is dispelled by the camaraderie of the musicians and by Farrell’s sense of humour throughout. When he attempts to teach us the chorus of ‘Fall Down Billy O’Shea’ he gives us a C-minus for our efforts, and when he forgets the lyrics to Seamus Kavanagh’s ‘Biddy Mulligan’ he quips ‘at least you know it’s live!’

As the evening draws to a close with the audience demanding an encore, the musicians arrive back onstage to bid us goodnight with their arrangement of ‘On Raglan Road’. It is clear from the onset that Farrell is intimidated by the song, and he admits to feeling nervous, but there is no need. Songs as beautiful as this should be sung and kept alive, and if anyone has earned a platform from which to perform them, it is Daoirí Farrell.

This is the second review published as part of our new Traditional Music Writer Mentoring Scheme supported by the Arts Council’s Deis traditional arts scheme. Over a number of months the editorial team of the Journal of Music will work with five new writers – Kevin McCullagh, Miceál Mullen, Ciara O’Leary Fitzpatrick, Sadhbh O’Sullivan and Moya Sweeney – and publish their reviews of traditional music around Ireland. 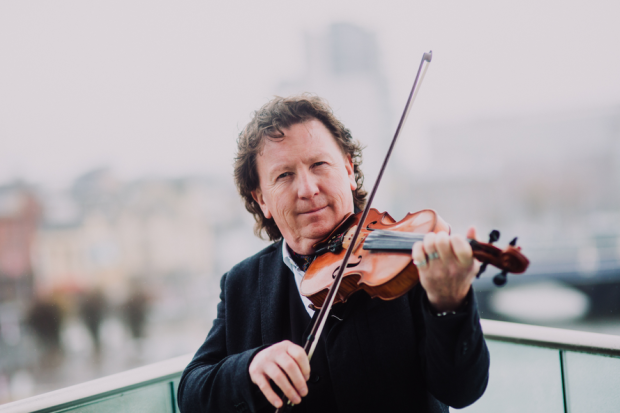