The High Drama of Homophobia

The premiere of Abomination: A DUP Opera (Outburst Queer Arts Festival, Lyric Theatre, 8 Nov.) by Northern Irish composer Conor Mitchell is timely, with equal marriage and abortion having been legalised in the North a month prior and a general election campaign in full swing.

Opera has long been an art form that is perfectly poised to tackle political issues, its theatrical nature enabling it to practice serious social commentary in distinct and compelling ways. Abomination, however, refrains from directly commenting on the conservative values of the DUP and instead cleverly constructs an opera using direct quotes and statements from prominent party members, allowing the words to speak for themselves.

Narrative thread
Performed by the Belfast Ensemble, a contemporary music-theatre group formed by Mitchell in 2017, the opera is based around comments made by former MP Iris Robinson during a 2008 interview with BBC presenter Stephen Nolan. During the infamous interaction, Robinson expressed bigoted views on what she referred to as the ‘abomination’ of homosexuality in the same week that a young gay man was assaulted in a homophobic attack. While the interview itself acts as the main narrative thread, verbatim quotes from various DUP members are interspersed throughout the piece.

Soprano Rebecca Caine takes on the role of Robinson, frantically pacing into view as a phone rings incessantly and newspaper headlines bearing words such as ‘attack’, ‘abomination’ and ‘homophobia’ flash upon the stage backdrop. The frenzied, chaotic nature of the strings match the rhythm of the chorus members navigating the stage as incendiary statements stream behind them. Caine’s virtuosic, rising arias are contrasted with actor Tony Flynn’s spoken portrayal of Nolan, who poses serious questions to which Robinson replies through song. This juxtaposition causes phrases such as ‘I don’t need a lecture from you, Stephen’ to be layered with comedic, dramatic undertones, brilliantly enhanced by Caine’s steadfast portrayal of the tragic, operatic figure. 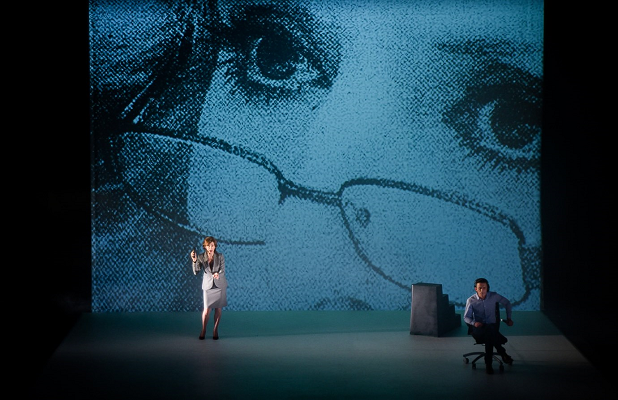 DUP statements made throughout history lend the piece a biblical quality and phrases such as ‘Peter will not marry Paul’ are heard repeatedly in the form of arias, duets and trios as strings, brass and woodwind dance around one another. Simple stage design and bold lighting changes further enhance the biblical nature of the words and music, with silhouettes, shadows and colours moving across the stage to create striking, stylised scenes. The contemporary composition and all of its accompanying elements make for high drama, occasionally bringing to mind Philip Glass and Robert Wilson’s Einstein on the Beach, with a similar rhythmic drive to Stravinsky.

Whispered, spoken and sung
At times, Abomination overwhelms. It is an hour-long assault on the senses, with red, white and blue balloons and confetti decorating the stage, actor and drag queen Mathew Cavan donning a magnificent orange wig and platform boots, and a ‘Love duet’ between Robinson and a wordless angel danced beautifully by Richard Chappell. All of this is accompanied by crescendo-laden music that frequently shifts from playful to tense, working to elevate words that are whispered, spoken and sung to highlight their lasting impact. 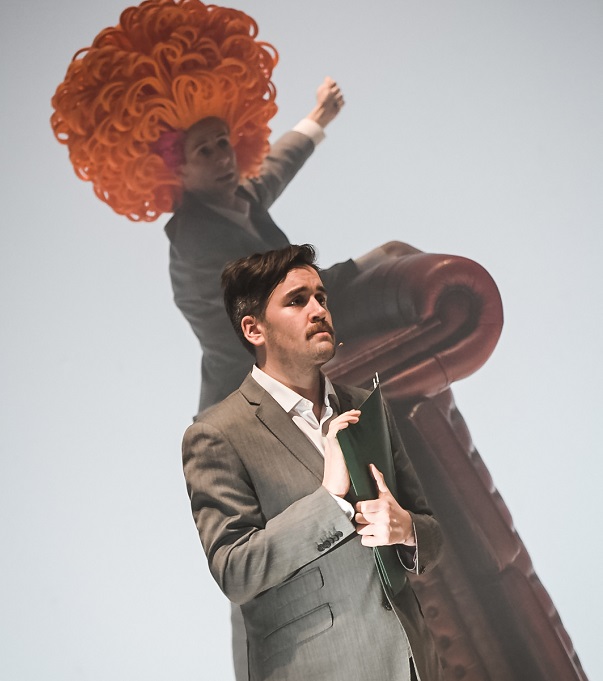 The audience is captivated for the entirety of the sold-out show, always laughing, often incredulous and on their feet in appreciation as the performance comes to an end. In speeches before and after the opera, both Mitchell and Outburst artistic director Ruth McCarthy highlight the importance of supporting events such as this one. Keep asking for it and they will keep writing it, is the general sentiment. Abomination is a provocative and relevant piece of political theatre that acts as a commentary on the power, the danger and the endless possibilities that words have to offer us. By creating an original work of art out of derogatory, demeaning statements, Mitchell reclaims and gives new meaning to them. For myself and the rapturous audience at the festival, it was an empowering and moving notion.

For more on the Belfast Ensemble, visit www.thebelfastensemble.com 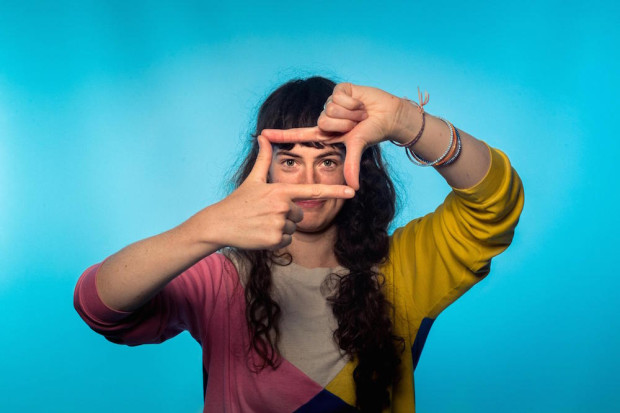