The final concert of Louth Contemporary Music Society’s Silenzio festival, of June 23–24, was devoted to the music of Salvatore Sciarrino. Four works were featured, after an engaging pre-concert talk between Sciarrino and Paul Griffiths: Immagine fenicia (‘Image of Phoenicia’), performed on solo flute by Matteo Cesari; the seventh string quartet, performed by the Quartetto Prometeo; Trovare un equilibrio, è necessario? (‘Finding a balance, is that necessary?’) a chamber work with Cesari joining the quartet; and, in the second half, Neue Vocalsolisten Stuttgart’s performance of the 12 Madrigali. The latter three works were all performed by the ensembles that premièred them, a remarkable coup for Louth Contemporary Music Society and its curator Eamonn Quinn. The calibre of performer that the society brings to Ireland receives less comment than that of the composers, but it is as impressive.

Journeys
The solo flute is a favourite instrument of Sciarrino’s, and his characteristic style is to use it not as a melodic instrument so much as an amplifier for the breath. Immagine fenicia, a relentless, toccata-like beat played with the tongue, under simple melody fragments and shrill jet whistles, dwindles from an assertive opening to almost nothing. By the end, the beat is almost implied rather than played, though the pulse never lets up.

The seventh string quartet, slow and spacious where Immagine fenicia had been relentless and tight, is a journey without a destination. The opening suggests a fairly simple downward direction: high, glassy dissonances and little scurrying motifs, all pulled slowly towards earth. But the first low note, an octave slowly peeled apart, arrives minutes earlier than expected, and the music itself recoils in shock. It turns without knowing where to turn to, and so wanders, high and low, never able to find respite, eventually vanishing in a hush.

Attending as something of a Sciarrino sceptic, the quartet’s compelling spaciousness began to win me over. Even more so the core of Trovare un equilibrio, è necessario? The sounds are beautifully detailed of course – that is Sciarrino’s bread and butter – but at the centre lies incredible tension and stillness; from the middle strings, bowing the edges of their instruments, an unearthly whispered rasp that endures for minutes, under interjections from the violin and flute.

Madrigali
The second half of the concert was devoted to Sciarrino’s 12 Madrigali. The work comprises settings of six haiku by the seventeenth-century poet Matsuo Bashō: two sets of six madrigals each. Sciarrino described the second set as having ‘small changes’ from the first; in reality, though they share motifs and sometimes structure, they feel quite different: often thinner, more brittle, like a faulty memory.

Each of the madrigals is just long enough for an exploration of the eight or so words that make the text of its haiku, the words frequently jumbled and chopped up. Often, they are dominated by a single type of sound: lonely notes stretched out in Quante isole! (‘How many islands!’), the first; in the third, called La cicala! (‘The cicada!’), high sounds and birdlike – well, cicada-like – vocal shakes; an almost relentless two-note pulse in Sole alto (‘Empyrean sun’), the final madrigal of each set.

Electricity
For all that the madrigals are paeans to nature, there is electricity present: Sciarrino describes how rearranging the words of the haiku creates ‘short circuits’, new images from the juxtaposition of unconnected words. The music, too, sparks and glimmers: finger snapping sounds crackle across the ensemble; falsetto notes hum like telephone wires; long-held notes build to a central flash.

The acoustic of St Nicholas’ seemed designed for the music, capturing and projecting the most subtle sounds without overamplifying loud notes. Immagine fenicia was something of an outlier in the programme, still built on soft sounds, but more extroverted and athletic. (It was in fact a programme change from Hermes, a solo flute work closer to the others in character.) The other three are works of absorption. Delicate sounds begin to glow through sheer persistence, drawing the listener in, like a mantra acting to focus the mind. Leaving the concert, you felt inclined, at least for a short while, to speak a little softer, and to listen a little closer. 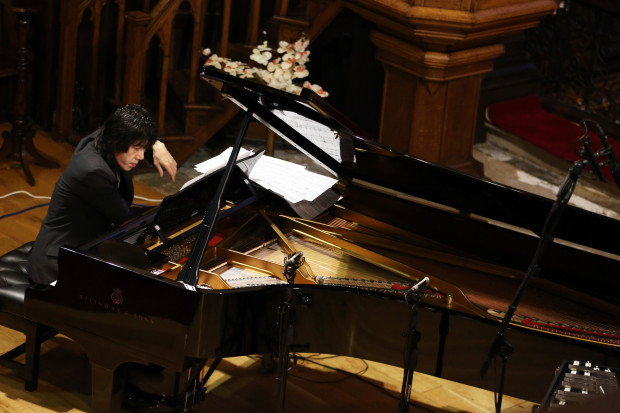