While North America at the turn of the eighteenth century was busy slinging arrows in a fight for survival and identity, south of the border down Peru way life was that bit more civilised.

Indeed, in Lima, Peru’s capital, where the interchange between Central/South America and Spain during the sixteenth and seventeenth centuries had seen the creation of a highly sophisticated society in the Spanish New World, high culture was flourishing and in 1701 the city hosted the premier of a new opera, La Púrpura de la Rosa.

Based on a drama by the distinguished Spanish playwright Calderón and composed by Torrejón de Velasco (whose move from Spain to South America in 1667 led to an appointment as choir master at Lima Cathedral and a reputation as an important and influential composer in the New World of mostly religious music), La Púrpura de la Rosa was commissioned by Lima’s viceroy as part of the city’s festivities for the celebration of the eighteenth birthday of King Philip V of Spain and the first year of his reign. After this first ceremonial performance, the opera fell into obscurity.

Enter its champion, Andrew Lawrence-King, three hundred years later. King, an early music specialist and performer with a particular fondness for Spanish Baroque music, recently recorded the opera and agreed to come on board as musical director for a staged production put together by the Hispanic Studies and Music Departments of Sheffield University.

While not quite a forgotten masterpiece that could have changed the course of music history had it been given the chance, La Púrpura de la Rosa, as highlighted by this colourful and lively production, is a novel and charming opera that deserved resurrection. In comparison to its European contemporaries, it’s short and sweet with an attractive and often sensual Latin American feel to its rhythms and melodies. Torrejón also

Most enjoyable in this production was the accompanying band of harp, strings, guitars, trumpets, bassoons and percussion that included castanets and tambourines led by King on the harp: it was through this diverse collection that the opera’s Hispanic influence came across the strongest.

And if not every soloist – drawn from all walks of Sheffield student life – had you crying for more, the many well-sung choral numbers always provided welcome respite.

Ostensibly the choruses are reflections on Calderon’s story – of a fatal love triangle between Venus (the god of Love), Adonis (her new lover), and Mars (her new jilted one) – but really most are thinly disguised paeans for the newly crowned Spanish monarch. In fact the entire story is little more than a flattering political allegory dressed in mythological clothing with some comic relief from fighting peasants thrown in for good measure. This could explain why this production, which was sung in Spanish (in keeping with the opera’s original version), didn’t provide comprehensive English surtitles as following Calderón’s story in detail was really of secondary importance.

At the end of the day it must be remembered that this was a student enterprise and put together on funds considerably less than what Lima’s authorities had in 1701. Better then to dwell on how colourful costuming and dramatic make-up to were used effectively to capture this opera’s festive feel than on weaker points like an over dependence on floating arms and twirling bodies (symbolic choreography I believe, from the artistic director, Jane Davidson) to move characters from A to B, or the ineffective use of pretty video images as a dramatic aid.

Strong solo voices worth noting were countertenor Daniel Keating Roberts as Mars, Filipa Lá as Venus and Penny Manser as Adonis (but what was that costume all about? Since when did any Adonis ever lure a woman wearing baggy trousers and a turban…?)

La Púrpura de la Rosa made its Irish premier in St Nicholas’ Collegiate Church as part of this year’s Galway Early Music Festival. Next stop is Spain when Sheffield University brings its production to Albacete, the birthplace of Torrejón. After that, where and when this unusual opera will turn up next is anybody’s guess. Maybe another three hundred years will have to pass before anybody finds out. 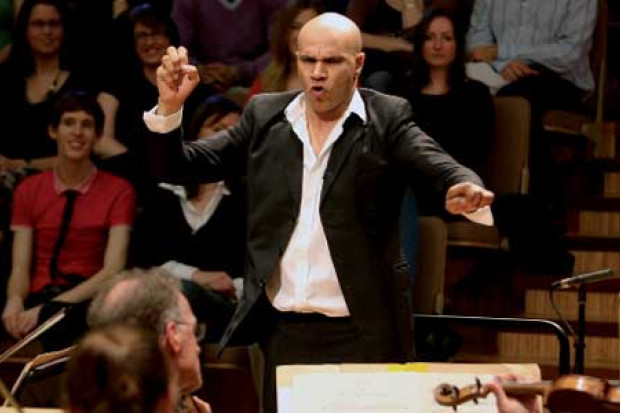