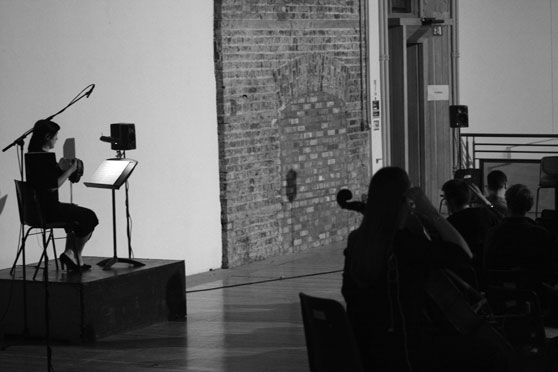 This concert, the second of three the Spatial Music Collective has programmed for 2008, matched the Bridgewood Ensemble with the Collective’s eight channel electronic setup, with six pieces for string quartet and electronics, and one for tape alone.

The threat that this concert would offer a monochromatic use of the string quartet’s resources (glissandi and tremolandi seemed to be the order of the day) receded to reveal as many different approaches as composers.

Enda Bates’ String Quartet No. 1 paired the live quartet with samples of strings sent through a granulation ringer, creating a spatialised chiaroscuro effect that faintly shaded the strings. All too faintly on the night, as Bates, perhaps wary of the reverberant space and anxious not to mire the instruments in a wash of electronic sound, held the electronics back a little too much. Otherwise, Bates’ was possibly the most crafted work of the evening, concise and efficient in its exploration of blocks of glissandi that climbed endlessly like the staircases in a M.C. Escher engraving. Bates’ work, along with Brian Bridges’ Flatlining, which centred on a tightly knotted cell of shifting microtones, gave the impression of a single idea being wrung dry by the composer, as if turned over and examined from all angles and teased out to its very limits on the page.

Daniel Jacobson’s Sleeptime and Simon Cullen’s Triangulayer used a much broader palette, pitching the strings against disparate electronic resources. Sleeptime wedded tremolos and pizzicati to the piston rhythms of a factory press, as if mimicking the fitful pulsing of a mind besieged by insomnia. Triangulayer didn’t quite strike such an equitable balance between strings and electronics, but gave the impression that the strings were accommodated in a piece that may have been realised just as well in another context.

In the second half, the string quartet was distributed to four small plinths, one on each side of the audience. An issue here is that being seated marginally nearer one performer than another results in a distorted acoustic image. Unless the performance takes place in a specially designed auditorium, there’s a particular sweet spot equidistant from the eight channels, two sub-woofers and four instruments that is the most effective listening position. Spatialisation engages the space like sculpture, but when a sculpture inhabits a room, the viewer is free to explore the space, to examine the work from all angles. In this context, the listener remained seated: it felt like trying to experience a sculpture by having your nose firmly pressed against just one side.

Ian McDonnell’s Lluks bore many of the hallmarks of his electronica duo, Lakker: fitful polyrhythms and heavy compression, which the acoustic instruments occasionally struggled to compete with. Jonathan Nangle’s piece for tape, Vespers, unfolded with the stately grandeur of a prayer service, yet still seemed like the seed of a much longer work that could stand to be developed over twenty or thirty minutes. Liam Grant’s Meditation was the most emotive of the works, drawing out plaintive motifs in a minor key that, through to the grim finality of the closing chords, offered little redemption.