Stephanie Dufresne and Ronan Leahy in ‘Least Like the Other’

Narrow Focus on a Repellent Worldview

Irish National Opera gave the world premiere of 'Least Like the Other: Searching for Rosemary Kennedy' in Galway this week, a work by composer Brian Irvine and director Netia Jones that tells the story of JFK's sister. Toner Quinn reviews.

Brian Irvine’s new opera Least Like the Other, which was given its world premiere at the Galway International Arts Festival on 15 July, tells the story of Rosemary Kennedy (1918–2005), the sister of US president John F. Kennedy.

Born with an intellectual disability, Rosemary nonetheless seemed to have lived a relatively full life until her early 20s, when her father Joseph P. Kennedy Sr decided that she would have a lobotomy – at the time, it was seen by some crackpot scientists as a cure for any number of things, including special needs, homosexuality, post-natal depression, infidelity and rebelliousness. Poor Rosemary simply liked men and they her, which was deemed unacceptable for someone with an intellectual disability, and this seems to be what led her father into the hands of the deluded surgeons.

If you are wondering why we need to hear about the misogynistic worldview of another overly powerful US family right now, Least Like the Other at least had a longer gestation than the current American president’s political life.

The project began five years ago when Belfast composer Irvine came across the story. His music is always a colourful explosion of scored and improvised sounds and he regularly embraces the unorthodox (most recently I saw him perform small miracles with the Totally Made Up Orchestra at New Music Dublin). In 2015 he premiered five short operas written in collaboration with John McIlduff that explored topics such as clothes ironing, a drive-by shooting, and smoke breaks. The commission to develop the Kennedy story came from Fergus Sheil of Wide Open Opera. Some snippets of music appeared online in 2016 but, in the programme notes for Least Like the Other, Irvine writes, ‘I created a huge body of responses but had no clear idea of what it was I was doing.’ Sheil, who is now Artistic Director of Irish National Opera, introduced him to English director Netia Jones and they began putting shape on the ideas.

Birth
At the Black Box Theatre in Galway, a bare, white stage had a table, stepladder, screen and two tall metal cabinets with dozens of drawers, the kind that you might find in an archive. Words and images were projected onto the screen and on the back wall of the stage throughout. The opera begins with the birth of Rosemary, mezzo-soprano Naomi Louisa O’Connell (the only singer in the work) standing up against a cabinet, breathing heavily and counting, a nurse (Stephanie Dufresne) moving swiftly through the room but clearly panicking. A narration off-stage to the right tells of the difficult birth and the delays with the obstetrician which meant the nurse had to ‘push the baby back in’. To the left behind a wall, rather than on front of the performers, was a fifteen-piece orchestra conducted by Sheil. The music was often frantic with regular changes in time signature, off-beats, and screeching leaps of large intervals.

The story then focussed on the Kennedy mother, Rose, writing her memoir (read by Aoife Spillane-Hinks off-stage) and recalling how her daughter, the ‘loser’, didn’t fit in with the rest of her children, the ‘winners’, and how the child wasn’t able for the sophisticated political talk at dinner time. On stage, Dufresne and Ronan Leahy worked around O’Connell, reading out barbaric statements, telling the story of Rosemary and the views of those around her in rather long texts that also appeared on screen. O’Connell was sometimes singing what they were saying, in tense, sorrowful passages.

There are sections of Rosemary’s teenage letters that tell of her learning French and which further illustrate how appalling her fate was. Swimming was an important part of her life and at times Irvine’s music becomes entirely tranquil and images of water and kicking legs are screened. The narrative gradually outlines the range of cruel ideas Kennedy Sr was influenced by and builds to the lobotomy.

Worldview
Rosemary’s tale is horrific and her story deserves our sympathy. It has resonances with contemporary ignorances. But in this short opera of 70 minutes, the tale was told in a way that rarely surprised us. We never got to really know Rosemary or the father; we found out more about the mindset of the mother. The repetition of director Jones’ format, with actors reading texts repeatedly, meant the drama had a circular feel, driving home the same point about the repellent worldview. It was mainly telling us about it rather than showing us in a dramatic way, and the impact wore off quickly.

Irvine’s compositions can be fascinating, his zig-zag changes in musical direction, his ability to move between the sombre and the zany, but the music for Least Like the Other, despite its bustle, felt stretched in trying to make this narrow narrative interesting. The orchestra and soprano writing was intricate on a micro level, but over the course of the opera it too sounded repetitive. Even the detour to some 1920s Charleston dancing felt forced, over-egging the point that a era of new artistic expression existed at around the same time as the Kennedys’ small-mindedness. It was only at the very end when O’Connell went to the cabinet, pulled out a photo of Kennedy Sr, ripped it in half and then began pulling hundreds of other pieces out of the cabinet that we were suitably overwhelmed by the story and got a true sense of Rosemary’s tragedy. Irvine’s accompanying music was suddenly crafted bedlam with much more range and included fragments of jazz and rock, brilliantly combining with O’Connell’s outrage.

It is so important that Irish National Opera and Galway International Arts Festival give a platform to new work like this by Irish composers. Irvine takes risks. He is an original. His work has often sought to give a voice to the marginalised, and he was clearly compelled to tell this story, but Least Like the Other was too narrow in approach for even this talented collective to shine.

Least Like the Other: Searching for Rosemary Kennedy runs until Saturday 20 July at Galway International Arts Festival. Visit www.giaf.ie/festival/event/least-like-the-other 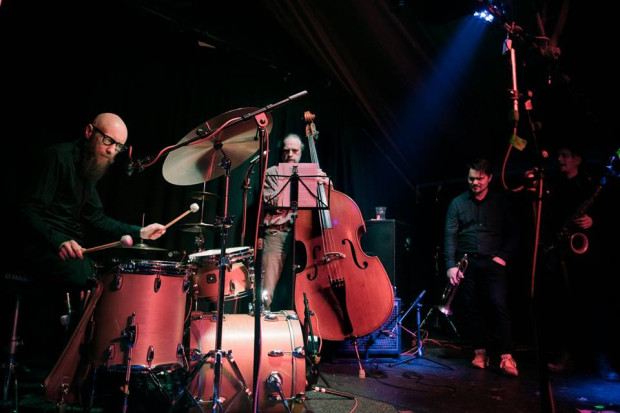