No Obstacle for Erraught Online

The second of Irish National Opera’s three Mezzo Masterpieces livestream events took place on Sunday night, this one featuring Tara Erraught performing a collection of bel canto arias with Fergus Sheil conducting the Irish National Opera Orchestra. The programme was a collection of songs from the standard battery of -inis (Ross-, Pucc-, and Bell-) with one from Cilea, and also featured the soprano Amy Ní Fhearraigh. The performance, organised in co-operation with the Office of Public Works, took place in Dublin Castle, and the venue, lit in blue, was both visually and acoustically arresting.

Naturally, most of the programme was chosen to showcase Erraught’s skills, which are manifold. She performed six bel canto arias, two from Bellini first, and four from Rossini. The absence of an audience created no obstacle for Erraught, who showed marvellous tone control in the slow opening of ‘Se Romeo t’uccise un figlio’ from Bellini’s I Capuleti e i Montecchi, before dancing through the later, quicker passages. She created a beautiful, gentle atmosphere in the same composer’s ‘Dopo l’uscoro nembo’ from the Irish-themed opera Adelson e Salvini.

Rossini is Erraught’s particular field of expertise, and her affinity for his music runs deep. In ’Ah se è ver’, an aria from The Barber of Seville added to the opera three years after its original composition and rarely performed today, she demonstrated great dynamic and tonal range, with agile ornamentation and a rich sound in the slower passages. Her passion and physical performance were evident throughout the concert, but no more than in her soulful rendition of Rossini’s ‘Assisa a’ piè d’un salice’ from Otello; at the end she seemed close to real tears. From Semiramide, her ‘Bel Reggio lusinghier’ showed a brighter sound, and the close of ‘La Donna del Lago’ gave a powerful conclusion to the concert.

Halfway through the performance, as part of Irish National Opera’s mission to showcase upcoming Irish talent, Erraught made way on the stage for the young soprano Amy Ní Fhearraigh, who performed arias from Puccini and Cilea. Taking the stage from a singer of Erraught’s skill and renown could be a challenge, but if Ní Fhearraigh was daunted it didn’t come through in her full, passionate voice. The later Romanticism of these pieces was also a good programming choice, allowing breathing space amongst the bel canto style of the other works. 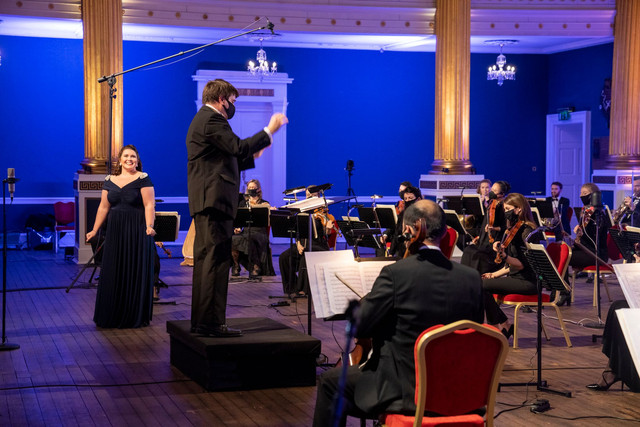 Online identity
The livestream also showed how far classical music has to go in figuring out its identity when it comes to the medium. The performance closely resembled a conventional concert, sans audience, with orchestra and conductor in evening wear and Erraught in a fabulous dress, and Irish National Opera’s executive director Diego Fasciati appearing between songs to provide introductions to the camera. This was, to be fair, a programme for an audience with certain expectations, and as much as it may have seemed strange for each aria to end with pin-drop silence substituting for applause, or for the orchestra to stand, again silently, at the end, this was likely in line with what the audience wanted.

But the organisers’ attempts to embrace the modernity of the medium came off as incongruent as times. At one point, Fasciati requested that audience members watching on social media mention the concert with the hashtag #MezzoMasterpieces, which produced just a little over a dozen responses.

The whole ceremony came across as taking solace in the known. Like the performers’ masks and plexiglass screens, the sense was of a livestream that was a livestream only because it had to be; that it would embrace the medium as far as it needed to, but no further.

Technologically, though, the stream was solid. The audio production, by Benedict Schlepper-Connolly and Simon Cullen, was particularly good, giving the orchestra solid, punchy brass and clear woodwind enveloping the strings. But the orchestra really was there as bedrock: under Sheil, they played expressively and well, but their role, primarily, was accompaniment. It was nice, then, that they got a moment to shine in the opening piece, the overture from I Capuleti e i Montecchi – a good choice for the agile ensemble, allowing each section a moment in the spotlight, from the robust brass and percussion in the marchlike sections to the graceful woodwind, with the strings dancing over it all.

Although its embrace of the medium falls somewhat between the stools of live performance and studio recording, the concert itself had the best aspects of both. This was the work of musicians who clearly miss their audience, and the same immediacy was there as would be in person. The stream will remain available until the end of the month.

There Are No Winners
Toner Quinn
Last weekend, Irish National Opera gave the first ever Irish performance of an opera by Vivaldi – the story of a formidable woman subjected to ridicule and abuse. Toner Quinn reviews.

‘There’s an infrastructure that hasn’t been built overnight’: An interview with Benedict Schlepper-Connolly and Garrett Sholdice of Ergodos
The Irish label Ergodos, run by Benedict Schlepper-Connolly and Garrett Sholdice, has just released its 30th recording, an album by the Ficino Ensemble featuring works by Brahms, Ravel and Sholdice. The two label founders spoke to the Journal of Music about growing Ergodos over the past 13 years, the role of a label in the modern musical ecosystem, and the arts infrastructure that is frustrating its development.
May 9, 2019