To See the Changing Light

Louth Contemporary Music Society's festival focussed on the work of Kaija Saariaho this year (21–22 June), with the composer in attendance. Brendan Finan reviews.

‘It’s so rare, isn’t it,’ I overheard someone say during the interval of the first concert at Stations of the Sun, devoted to the music of Kaija Saariaho, ‘a woman composer.’ Of course, it’s not nearly as rare as a conventional music history education would suggest, and that is part of the motivation, I think, in dedicating half the programme of the festival to the work of three female composers: Saariaho, Linda Catlin Smith, and Pascale Criton. In the interview before the final concert, all three spoke of the lack of female role models in their composition education; Catlin Smith mentioned Lili Boulanger as the only female composer she’d been given access to, and Saariaho spoke of finding role models in women writers and artists rather than composers. All three also spoke of the sea change occurring now in the recognition of female composers – historic and contemporary. But there’s obviously more to do.

Stations of the Sun was the title given to this year’s Louth Contemporary Music Society festival, an event that turns Dundalk into an annual pilgrimage site for fans of contemporary music. This year’s festival focussed heavily on Saariaho, to whom two concerts were devoted, as well as featuring work by György Kurtág and a centuries-spanning performance by the Russian Patriarchate Choir of Moscow. The festival, beginning with a concert on Friday night and running a further four on Saturday, bridges the parochial and the global, with international performers playing in a primary school chapel, and a local school orchestra playing their own work for Saariaho.

The chapel of St Vincent’s Primary School hosted works by Kurtág in the lunchtime concert on Saturday. Performing alone, the violinist Hiromi Kikuchi used no fewer than eleven music stands, working her way from one side of the stage to the other in a performance of HiPartita (written for her and incorporating her name). A set-up like that suggested a performance incorporating dance (Bach’s partitas, after all, were dance music), but that didn’t manifest, except in a series of stabbing notes ending the seventh movement, on which Kikuchi bounded back to centre stage for the last.

Kikuchi’s playing was beautiful, at times so soft that I was uncomfortably aware of the scratch of my pen on notebook paper. Much of the work is pensive and sombre, with plaintive unanswered questions, though Kikuchi made much of the heavily accented perpetuum mobile of the second-last movement. The third movement in particular is striking, moving almost entirely in steady single beats and pausing for breath every few seconds. Following HiPartita, Kikuchi was joined on stage by her husband, the violist Ken Hakii, and together they performed two relatively light duos by the same composer.

Journey
After the Kurtág, the longest space between concerts during the festival allowed ample time to wander across town to the Oriel Centre in Dundalk Gaol for the Goeyvaerts Trio’s performance of music by Pascale Criton, Linda Catlin Smith and Peter Garland.

The trio’s performance was very impressive, drawing out small changes in static harmony in both Smith’s Meadow and Criton’s Hold, and in the latter the cello seemed almost to speak at times. Though it was the shortest piece, the Criton worked best for me at this concert: a ten-minute journey through a variety of sounds from the group. I was less convinced by the other works; the Smith was often beautiful, but too long, and Garland’s When We With Sappho a little too sweet.

The choir’s sound was extraordinary. In the seventeenth-century architecture of the church (the acoustic of which Saariaho called ‘lively’), they achieved a punchiness that could have belonged to an ensemble five times their size. In louder passages, higher overtones bounced and crashed around the ceiling of the church and created a crackling effect that I couldn’t decide was in the building or in my ears.

Intimate and moving
It says a lot that this performance, which brought the house down, was only the third-best concert of the festival. Saariaho’s two concerts – the first and the last – were more intimate and more moving. Both mainly featured solo or duo works, often with electronic accompaniment, and with the composer in attendance.

The first took place in the Oriel Centre. The opening of the first work, Laconisme de l’aile, performed on solo flute by Camilla Hoitenga, served as a microcosm for the whole festival: the performer began, rapidly, quietly reciting into her flute, and a near perfect transition into a fluttered tone, again nearly perfectly flattened out into a clean one. These smooth transitions, where the technique shifted without a break in momentum, featured again in Lonh, performed by the soprano Raphaële Kennedy, from speaking to singing at the beginning of the work, later sometimes devolving into an aggressive whisper.

The electronics often supported or imitated the musicians, sometimes drifting in a lingering echo, like the sustain pedal on a piano. Their effect was immersive, at times bolstering the natural sounds of the instrument so that they surrounded the audience completely. In some works, like the title work for the concert, Changing Light, the musical structure seemed clear, soprano and violinist Aliisa Neige Barrière swapping busier and stiller passages; in others, like NoaNoa for flute and electronics, you were aware that there was a logic to the progression without necessarily knowing what it was.

Whisper-quiet
The final concert, which, including an interval, ran to almost three hours, again was mostly devoted to the composer’s works for solo and duo performers, but also featured the META4 Quartet finishing each half with one of the composer’s two string quartets – Terra Memoria and Nymphéa. Given Saariaho’s use of electronics, the difference between the string quartets and the smaller works was more one of timbre than of textural weight, although, as with the other performers, META4 were equally at home in both whisper-quiet and violent passages. Nymphéa, the older of the two works, extends to both of these extremes, while Terra Memoria is a slow, inexorable build and descent.

Saariaho’s music, as often as not, is concerned with imagery and light. My own impression of listening to her music feels as close as I will ever experience to synaesthesia: her music, often rigorously worked out structurally, nevertheless bubbles with colour and abstract shape. It has changed in the forty or so years that she’s been composing – her recent music is more melodic, maybe more spacious, or more delicate – but never sounds old-fashioned, and always sounds like her. Both of her concerts had works from vastly different times in her life nestled against each other; the effect was a panorama of her career so far, a chance to see the changing light. 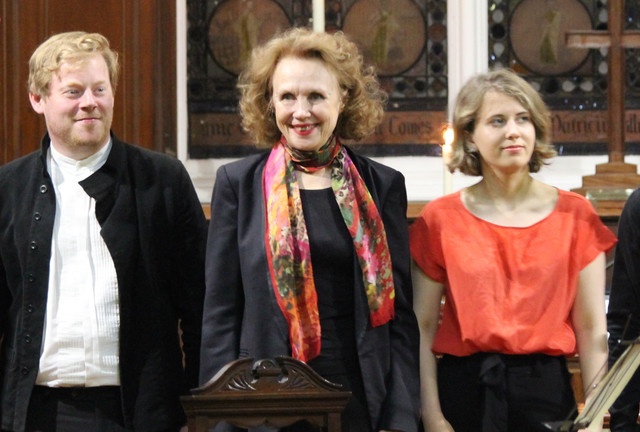