Cian Ó Cíobháin, host of RTÉ Radió na Gaeltachta’s An Taobh Tuathail (The Other Side), has compiled a third volume of music that he’s been broadcasting late at night. The fifteen tracks feature both Irish and international artists and, as one might imagine, it’s a fairly eclectic mix of off-daytime material. Indeed, the only common thread is that, presumably, all of it has tickled Ó Cíobháin’s fancy at one time or another.

Maybe it’s a late-night radio thing, but there’s also a wide range in quality on this release; the first track, for instance, perplexes me – Loner Deluxe’s ‘Frozen Glass’ is the kind of lazy, repetitive and maddening bit of noodling that makes me want to reach for a hammer. It’s also fairly representative of a tendency in different kinds of non-daytime music to come up with an idea (not necessarily a good one) and to repeat it ad nauseam for three or four minutes with the minimum of decoration or, heaven forbid, variation, until a broadcastable slice of time is filled; one does, however, expect a minimum level of craft to be applied. My despair was short-lived, however, because the next track is the best thing on the album: ‘Night Swimming’ by Roshi featuring Pars Radio is a beautifully crafted song thoughtfully harmonised with soaring vocals by Roshi herself, possessor of a haunting voice which ensures you stay caught the whole way through. In fact, almost all of the pieces which feature vocals work well here, from ‘Night Swimming’ to Circlesquare’s ‘Music for Satellites’ (simple but fun) and Essie Jain’s ‘Haze’, which features another lovely voice, although the descent into overt oom-pah at the end is a bit puzzling – she just about carries it off though. A real delight is Galway musician B-Movie Lightning’s ‘Triple Trouble’, a piece of pure 1980s pop given a twenty-first century coating: everything from the swooning backing vocals to the lyrical thrust (‘I need a talking to’) is really well done. Even Peter and the Wolf’s ‘The Highway’ benefits greatly from the peculiarity of the lyrics, which ensure one thinks more about them than the rather dull music underneath.

Of the instrumental tracks, the standout for me is Berlin-based Miwon’s ‘Shinkansen’, which is quietly driven, densely-layered and weighty in a way some of its bedfellows are not; Miwon knows how to construct a piece of instrumental music, give it energy and push it in the right direction – it has a feeling of being sculpted and considered. Mount Kimbie’s ‘Maybes’ is also an ear-catching piece, pacey and grounded with a vocal of sorts scooting in and around; it’s a shame it’s over so quickly. In contrast, The Caretaker’s ‘False Memory Syndrome’ is obviously a more acquired taste than I’m able to obtain – its dreary, hazy mix of nostalgia and an unpleasant drowning sensation probably didn’t evoke the kind of reaction in me he was hoping for. On the other hand, Kilkenny musician R.S.A.G.’s ‘Dwelling on the Past’ is definitely enjoyable, combining a sophisticated layering of elements with an overall lo-fi feel; but it does have that sense of lacking a final ingredient – a vocal or a tune, perhaps. 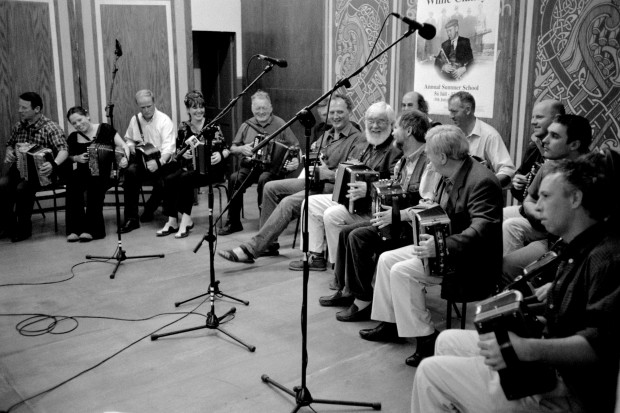 In Praise of the Ceili Band
Ciaran Carson
There’s a burst of applause before the band launches into a set of reels: the pace is immediately fast and furious, and you can hear the audience in the background, whooping and hurrahing above an excited buzz of conversation. I can’t see the line-up,...