In a live broadcast from the Oireachtas festival in Co. Donegal last year, following a brief, jocular interview with the television host, fiddle-player Ciarán Ó Maonaigh seemed to step into a different personality. Standing four-square on front of the camera, eyes wide open and fixed on his fingers, bow pressing unconventionally hard against the strings, he presented a robust, almost aggressive treatment of a selection of reels. The performance stood out for its intensity, but it also drew attention to the journey travelled since his solo album Ceol a’Ghleanna in 2004. Apart from two fiddle duets with Dermot McLaughlin, which seemed to unlock a daring side to Ó Maonaigh, there is only slight suggestions of the gutsy musician that was still to come. Significantly, these duets were based directly on earlier recordings of mid-twentieth-century Donegal fiddle-players, John and Mickey Doherty and Frank Cassidy, and with his reimagining of these classic performances, Ó Maonaigh seemed to have found his niche.

His next project, an equal partnership with Donegal fiddle-player Aidan O’Donnell, and a 2008 CD titled Fidil, saw him clearly play to his strengths, with an album of pulling-at-the-leash duets that presented an imaginative vision of contemporary Irish fiddle playing: raw, primal and employing a brave disregard for stylistic convention.

Ó Maonaigh and O’Donnell have now been joined by another fine fiddle player in Damien McGeehan, and still working under the title Fidil, have released an album called 3. The challenge in multiplying fiddle-playing not just by two strong personalities but by three is clear. What is the ideal approach? Carefully worked out arrangements? Alternate soloing? Complete spontaneity? Fidil experiment with all three, but it’s difficult not to notice that the exhilarating freedom of expression that was so to the fore on the first Fidil album has been distilled slightly, creating an album with a more compositional, controlled approach. Bowed harmonic lines and strummed chords interlace with renditions of a mainly Donegal repertoire, and while the entirely unorthodox ‘Hunt of the Hound and the Hare’ suits the trio perfectly, giving them an abundance of material to work with, the overall sound of ‘Dinkies’, tunes of such character that it should have been the perfect opportunity for the trio to excel, struggles to represent the collective and individual brilliance of the three fiddle-players. Nonetheless, as live performances of the group have shown, Fidil is capable of great things, and ‘Francie Mooney’s’ barndance shows the trio at its best: striking an inspired balance between introspective solo fiddle and an intuitive, bowed and plucked accompaniment of real depth.

The Land From Which it Came
Moya Sweeney
In the fourth review from our new Traditional Music Writer Mentoring Scheme, supported by the Arts Council, Moya Sweeney reviews the latest recording from the Donegal traditional group Fidil. 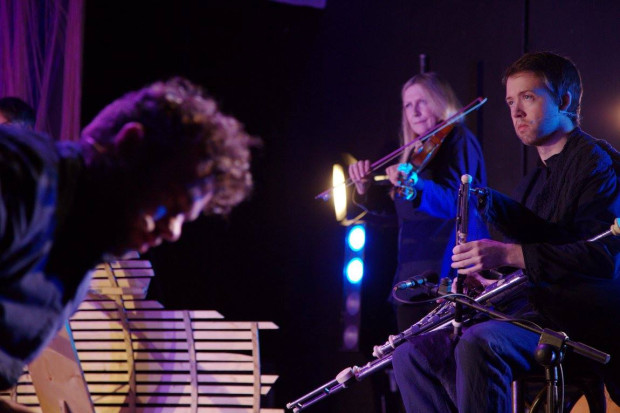