This book is a complete edition of the extant travel diary which Séamus Ennis wrote while working for the Irish Folklore Commission. The diary, which now forms part of our National Folklore Collection, is mostly written in Irish and covers the period of Ennis’ employment with the Commission until 19 July 1946. Although he continued working for the Commission until the end of July 1947, journals for the last year of his tenure haven’t come to light. This gives a somewhat unbalanced view of his work, as the material which he collected in West Munster, from Elizabeth Cronin and others, was recorded subsequent to the period covered by the diary.

In her excellent introduction, the editor, Ríonach uí Ógáin, explains that the Folklore Commission was in search of a full-time collector of songs and music in 1942. Séamus Ó Duilearga (James Hamilton Delargy), director of the Commission, realised that Ennis had all of the necessary qualifications for the task in hand – proficiency in music transcription, fluent Irish, a thorough understanding of the musical tradition and a facilty to work with singers and musicians. He was offered the job and his career as a collector began on 1 June 1942, at the young age of 23. Having spent the following month transcribing recordings of music in the Commission’s head-office, he set off for Co. Galway on his first field-trip on 2 July 1942.

The collectors employed by the Commission were required to keep a diary in tandem with their recording activities. This was at the instigation of Delargy, who adopted many of the practices which he had observed at first hand amongst folklorists in Scandinavia.

The Second World War forms a backdrop to much of Ennis’ journal. Train journeys were extremely slow, and Ennis cycled from Dublin to Galway on his first field trip. On 3 July, he recorded his first song, a verse in Irish of ‘Is í Nóirín mo mhian’, which he transcribed from an old man in Oranmore in return for a pint! The latter piece of information is taken from a letter which Ennis wrote to his friend and colleague Seán Ó Súilleabháin, the Folklore Commission’s archivist. (Additional material of this type, which is taken from a range of associated documentation, is provided in editorial notes throughout.) Ennis then spent some time collecting in south Connemara, where his ablilty as a collector is evident; his persistence in obtaining songs from initially reluctant informants is already noticeable. When a particular singer eventually agreed to provide him with songs, he wrote in Irish in his diary (the 15th of July), that when faced with such reluctance, ‘skill is required and practice, qualities which I have begun to acquire by now’. He was obliged on his early field trips, to write both words and music without the aid of an ediphone.

He spent the last month of his first field trip further west, in the parish of Carna, on the instructions of Delargy. According to the entry in his dairy for the 20th August, somebody recommended that he go to ‘a place called Ard (An Aird Thoir / Thiar), a few miles west of Carna’. He was also given the name of a singer called ‘Colman Keane, Glynsk’. The latter is none other than Colm Ó Caoidheáin, from whom Ennis subsequently recorded about 150 songs. He visited An Aird two days later and he noted hearing almost one hundred songs in one evening! Many of the famous singers from that part of Carna subsequently provided him with songs, such as Seosamh Ó hÉanaí, Seán Jeaic and Seán Choilm Mac Donncha. On that first trip to Carna, he also wrote almost 40 songs and tunes from informants on the adjacent island of Fínis, whom he regarded as ‘an dream is gealgháirí in Éirinn’ (the most cheerful people in Ireland)!

He finishes this account of his first field trip by thanking God, ‘who put so much music and so many good people in my way and who kept me free from every misfortune while I was away from home’.

Overall, the diary gives an account of over 15 months spent in Co. Galway on ten separate visits (which also entailed checking his earlier transcriptions), six months in Co. Donegal, a month in both Co. Mayo and Co. Clare, about a week in Co. Limerick where he specifically enquired about ‘Irish country dancing’, and two working days in Co. Cavan, where he noted a number of songs. ‘Co. Cavan’, he wrote (October 1942), ‘is very rich in ballads and instrumental dance music, which latter however, is for the most part very well known.’ There are many references in the diary to well-known tunes and songs learnt from books which he didn’t include in his collection.

He seems to have spent his two field trips to Co. Clare in search of Irish singers. He also notes how impressed he was by the whistle playing of Packie Russell (aged 24 at the time, 1944), in Doolin. There is a lovely account of how he managed to obtain songs from Martin McNamara in the County Home, Ennis. A native of Crusheen, in East Clare, ‘he was’ (Ennis wrote) ‘a very good singer and even at his age (c. 69), was still able to do the fine ornamentations and grace notes peculiar to his style of singing.’

His field trips to Co. Donegal also yielded important results, such as the tunes he obtained from Frank Cassidy (‘Tá a shárú le cloisteáil agam le veidheal fós’, I have yet to hear his equal on the violin), and from an initially reluctant Neilly Boyle (‘fidléir thar barr agus cumas aige nach bhfuil ag níos mó ná triúr fidléirí uilig’, a wonderful fiddler and only three fiddlers in all have his abilty). He also gives a beautiful and moving description of hearing the religious song ‘Gol na dTrí Muire’ sung by Nóra Gallagher aged 84 from An Sruthán, Gort an Choirce, and so on.

While reading the diaries, I was struck by a certain similarity with the work which John O’Donovan undertook for the Ordnance Survey in the early nineteenth century, and which he so ably recorded in his letters and in other documents. The onomastic and antiquarian information which O’Donovan preserved for posterity is of course paralleled by Ennis’ superb collection of music, song and folklore. Although almost a century apart, many of the difficulties endured by both men while engaged in field-work are similar, such as bad weather and poor transport. Ennis often complained about the weather which forced him to postpone or abandon his field work: ‘Tá mé an-tuirseach de Chonamara le seachtain agus é ag síorchur báistí’ (I am really tired of Conamara for the past week as it has been raining continuously) he wrote on 26th July 1942. He didn’t have the use of a car until May 1946.

Séamus Ennis emerges from this account as an immensely talented young man, full of vigour and energy. He could turn his hand to virtually anything, currach rowing, hay mowing, bicycle, ediphone or clock repairs (when required!). He wasn’t just a conscientious and expert collector of songs and music, he also embraced personally and professionally the genius of those he worked with and endeared himself to many.

The book is beautifully designed and produced. Excellent handwritten maps precede each chapter. There are photos of the people and places which he visited on practically every page. The indexes are also very comprehensive. The index of people has over one hundred pages of detailed entries. Leabhar den scoth! 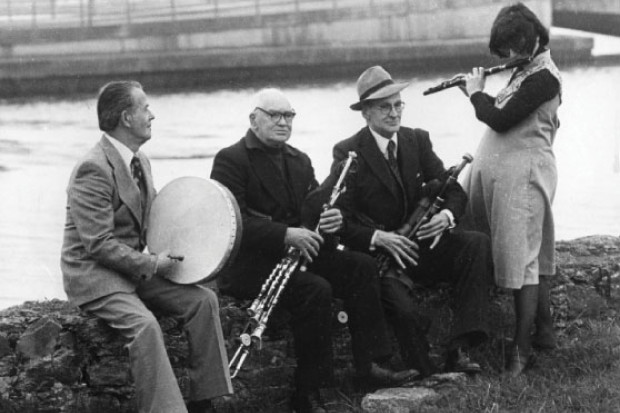