Just Inside the Green Line

Tim Rutherford-Johnson discusses one of Europe's most unusual music festivals, which takes place for the fourth time this year in Cyprus.

To get to one of Europe’s newest and most unusual contemporary music festivals, walk east of the town’s commercial heart, north of the historic old city. Go past a large, but hardly used municipal market hall into a labyrinth of narrow streets and run-down buildings. The occasional house opens its front doors to reveal a forlorn red glow. The street ends abruptly in a barrier fence and some shattered, abandoned apartments. At precisely 8:20 each evening a muezzin begins the call to prayer, ringing out from an invisible source beyond the fence. A sentry sits, inside a cage, with a rifle across his knee. Turn right, and you’re there.

This is the Shoe Factory, Nicosia, the private home of Garo Keheyan and principal venue for the Pharos International Contemporary Music Festival (PICMF), which begins this week, and runs until 29 September. The ruins you can see behind the fence are inside the UN-controlled buffer zone, or Green Line, that has separated Greek and Turkish-occupied Cyprus since 1974. I visited the festival last summer; this year is its fourth edition.

We are on the Greek side of the line. Speculative money has moved in, and among the poverty and dilapidation are points of high luxury, like newly-crowned teeth: architects’ studios, a designer jeweller’s, Nicosia’s best paved streets. Freshly delivered Ikea catalogues hang in bags from every door, awaiting perusal. Many buildings have been renovated, often to a very high standard. The Shoe Factory is the most remarkable of these: a minimalist/modernist dream of white render, glass and burnished copper.

It has a roof garden, a mezzanine balcony with bedrooms and bathrooms, and at the back a marble-lined pool and terrace, but the building is essentially a large, two-storey, open-plan atrium. It is divided by a glass light well; to the left is a long dining table plus kitchen, to the right a small concert hall-cum-drawing room. It sits about 120, on chairs and sofas, around a Model D Steinway and room for half a dozen players. On the walls hang huge, statement paintings. The atmosphere inspires both awe and deep comfort. It is a remarkable place to listen to new music.

The PICMF is run by the Pharos Arts Foundation. A philanthropic cultural and educational foundation established with the aim of promoting the very best in the arts in Cyprus, its other activities include a chamber music festival, a centre for contemporary art, a lecture series and a publishing house.

Keheyan is its founder and president. A former board member of various banks, he is also an honorary consul for Brazil and the Chairman of the English-Speaking Union for Cyprus. He is exceedingly well-placed, therefore, to call on the contacts and resources to make something like Pharos succeed. Wealthy and powerful, he is also extremely generous, and a passionate believer in the transformative power of the arts.

And he doesn’t lack ambition: in an interview given in 2010 he described his ‘vision for a better society’, in which a centre for art, culture and dialogue funded by Pharos would ‘bring together men and women of goodwill from all these cultures and religions to find a common language and to explore ways in which we can develop a saner, healthier and more sustainable world at the beginning of a new century and millennium.’

That centre is yet to be built (although it surely will be), but the ethos of dialogue, of the salon or soirée remains the spirit of the Shoe Factory. Modern classical music is still a relatively new phenomenon for Cyprus (the programme for the first PICMF resembled the new music festivals of the 1960s Eastern bloc, full of classics in an attempt to ‘catch up’), and its modest audience is enthusiastic and talkative. The surroundings – more like a living room than a concert hall – foster those kinds of conversation.

The 2012 festival continues in this line, commissioning a total of twenty young composers (including Christian Mason, Brian Herrington and Tomi Räisänen) to be performed alongside chamber works by Stockhausen, Xenakis, Nicolaus A. Huber, Georg Friedrich Haas and others. New music by Cypriot composers is always a feature, and is represented this year by Evis Sammoutis, Christina Athinodorou and Sophia Serghi.

It is a striking aspect of Cypriot culture that its brightest and most talented leave the island as soon as they can: there simply aren’t the opportunities at home. Serghi, for example, was born in Nicosia but left Cyprus as a teenager. She now teaches in Williamsburg, Virginia. Last year’s festival included a workshop for three young Cypriot composers, Artemis Aifotiti, Andreas Tsiartas and Andys Skordis. All still in their twenties, each had studied in a different European country: Great Britain, Germany and Holland, respectively. And, eyes closed, it would have been simple to tell which was which. That’s not a criticism, incidentally: all three showed talent, and Skordis’s juddering post-Andriessen style particularly impressed me.

Towards the end of my week at the 2011 PIMF I was told that writers from the Cypriot diaspora in Africa have recently begun to return to the country of their parents and grandparents. Sammoutis himself now holds a teaching post in Nicosia, having studied in the UK and around Europe. Music and the visual arts depend upon a greater infrastructural support than writing, but with events like PICMF beginning to gather momentum, Cyprus may be able to reclaim some of its overseas cultural capital. Only then might a new Cypriot music reveal itself.

Tim Rutherford-Johnson is a freelance editor and writer on contemporary music living in England. He blogs at The Rambler (johnsonsrambler.wordpress.com). 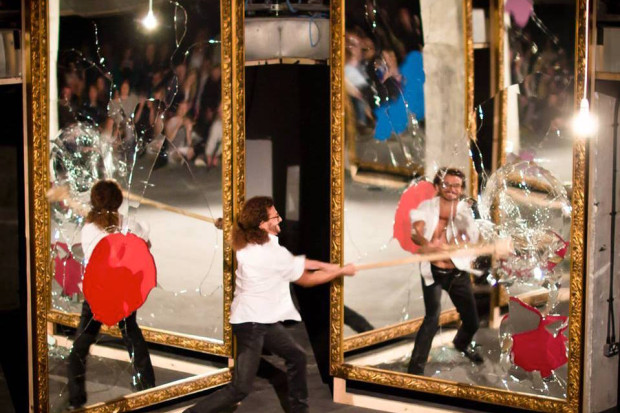