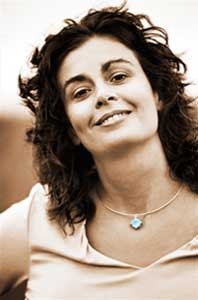 The London International Festival of Exploratory Music (LIFEM) seeks out music with a ‘proactive’ attitude. Its programmes spread out across genres; this year alone the artists were as diverse as DJ Scotch Egg and sean-nós singer Lorcán Mac Mathúna. The festival’s name places it in sympathy with the model of experimental music, but it has a wider perspective and offers something fresh to audiences.

Performing in the crisp acoustic clarity of Hall One at Kings Place, Jenni Roditi and Andrew Poppy gave two very different renderings of minimalism. Roditi’s background is in composition, having graduated from the Guildhall with some very promising notices for modernist-tinged graduation pieces. She has more recently preferred tonight’s format: small band performances of song-based compositions that inhabit an occasionally fruitful aesthetic area somewhere between Kate Bush, Oum Kalthoum and Philip Glass. Rondo forms – made of angular but supple vocal-piano motifs interspersed with minimalist pulsing from ensemble – rub shoulders with shorter settings of her own and others’ poetry.

Here we heard the impressive Kate Bushisms of Trust the Moment (her Aerial era), the Messiaen-slight The Poet, the more subtle modal minimalist Home, the slender Love’s Song, and the frankly post-Edwardian sweet pop styling of Into the Stream. Roditi’s music is endearingly intimate, but it can also often feel a little glib, even pat. However, the strongly-characterised performances from Bernard Greenwood on gypsy-flavoured violin, Kate Shortt on cello as ersatz electric bass, Neyire Ashworth on sweet-toned clarinet and Roditi herself on lithe and sensuous piano and voice, largely compensated any artistic shortcomings evident in the music.

The performance by the Sustaining Ensemble of music from their leader Andrew Poppy was much more intriguing. The enigmatic presentation included subtle dusk lighting effects from Martin Langthorne and a back-projected video from Julia Bardsley that deepened every sinew of the music with quite direct visual notations. The opening Wave Machine was a minimalism-as-ambient meditation akin to some of the ‘landscape’ works of John Luther Adams. The performance created an impression of wide resonant space, extraordinary given the limited gestures of the small ensemble of glock, vibes, piano and keyboard. Wave Machine bled into My Father’s Submarine, which had Poppy priggishly reciting an obscure but evocative poem about patrimonial memory whilst ensemble gurgled away beneath. The video shimmered the text in close imitation of its subject.

The tone of the performance shifted for the last three pieces. First came the much crisper, staccato minimalist funk of What Else: What Then Now. Anchored by a spry seven-beat piano backing track, the group, with Poppy and Kate Halsall swapping piano and keyboard stools, weaved a pleasing dance of tight thrusts and limber syncopation. Almost the Same Shame was darker; the expanded percussive palette (drums and cymbals now key) and the drone-inflected sub-bass backing made for shadowy but vivid music. Bowed vibes and marimba led into Wet Fold. Again largely eschewing the earlier gestural clarity, the musicians here gave another low murmur. The piece oozed less than Almost the Same Shame, but its twilight visuals and darkly-funky electric bass foundations brought an inscrutable performance to an exhilaratingly murky end.