The Newest of the New: An Interview with Fergal Dowling of Music Current

Pursuing the latest in contemporary music sounds is key to the focus of Music Current festival, which begins next week in Dublin. Artistic Director Fergal Dowling spoke to the Journal of Music about the ethos of the event, current trends in music, and the ensembles performing this year.

One month after the New Music Dublin contemporary music festival has ended, audiences in the city will again have the opportunity to immerse themselves in four days of newly composed music. Music Current, now in its fourth year, is directed by composer Fergal Dowling and runs from Wednesday 10 to Saturday 13 April.

The core ethos of Music Current is to focus on the newest of the new, finding and presenting works written in the last few years. The 2018 festival included a performance of Stefan Prins’ Piano Hero, which, Dowling says, ‘is a hugely important work and technically very ambitious… really at the limits of what we could achieve technically’. In 2016, the festival gave the Irish premiere of Jennifer Walshe’s innovative Total Mountain.

This year, it features ensembles such as Ensemble Tzara from Switzerland, the Stock 11 collective from Germany and the Swiss group Retro Disco ensemble, as well as a number of works by Irish composer Frank Corcoran. ‘We try to be as new as we can,’ says Dowling. ‘We try to have everything as fresh as possible. The newest work we can find.’

Extra-musical
The result is that Music Current’s programmes can also discern trends in today’s music. ‘There seems to be a strong wave of interest in extra-musical activity,’ the composer says, referring to the use of devices from outside music in new work – ‘beyond sound into theatre, action, lighting and video. Composers are writing for all kinds of forces and materials.’

A good example is Steven Takasugi’s Sideshow (composed 2009–2015), which will be performed on Thursday 11 April at Smock Alley Theatre. Performed by Ensmble Tzara, it’s a piece for amplified quintet and electronic playback in five movements.

The performers are literally performing in the theatrical sense, not just a musical sense, and the score gives pages of directions on performance instructions at the very beginning, before the first note. It’s a piece that must be seen as much as heard.

Bite with all their might
Dowling suggests that this extra-musical element in new music is partly a result of traditional musical structures breaking down, and composers and performers finding new ways of working together.

Because people have to get out and make their own music, because institutions are not so accessible … they’re dealing with other artists and performance spaces outside concert halls and traditional concert venues. They are working in different arts spaces, and bumping into people outside their training.

Another good example at this year’s Music Current is the Retro Disco ensemble concert on Friday 12 April, which features Katharina Rosenberger’s 2016 work If they bite with all their might, written for ensemble and light bulbs.

Sweeney’s Vision
Despite the focus on presenting very new work, Music Current will this year present some of the oldest works it has ever included in its programme – three pieces by Frank Corcoran, written between 1997 and 2004.

Quasi una Missa, Tradurre Tradire and Sweeney’s Vision were all originally written for radio. For the Music Current performance in the opening concert on Wednesday 10 April, they will be presented in surround sound.

For Dowling, Corcoran is ‘a determined, singular character who produces timeless music… The music comes from somewhere ancient, persistent and resonant.’ Corcoran, who is based in Germany, will attend the performance and give a pre-concert talk.

Whose Music?
An important part of Music Current is the fact that it invites scores from composers globally in the run up to the festival. On Saturday 13 April, Retro Disco ensemble will perform a selection of the works submitted, including compositions by Claire Fitch, David Bremner, Seán Ó Dálaigh and Maya Verlaak. There is also the premiere of a Music Current commission, a work by Patricia Martinez who is based in Buenos Aires.

This year’s festival also features a public discussion on current compositional trends  – a regular part of the event. The discussion is called ‘Whose Music?’ and will focus on the potential impact of artificial intelligence (AI) on composing.

Music Current began with the music group Dublin Sound Lab, which Dowling founded with harpsichordist Michael Quinn in 2008. They originally formed the group to perform their own work, and while Dowling has performed on electronics in Music Current, and his work Perisonic was presented in 2017, Music Current is now primarily about bringing new international work to Irish audiences.

‘Like many composers,’ Dowling says, ‘I kind of drifted into promotion and production. I’m an accidental festival organiser.’

Music Current takes place from 10 to 13 April at Smock Alley Theatre in Dublin. For further information and  booking, visit www.musiccurrent.ie 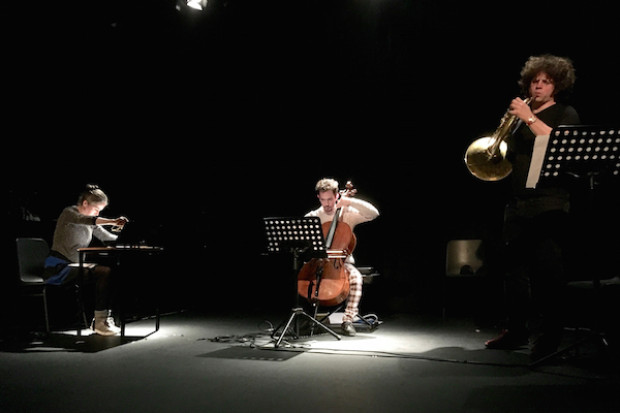