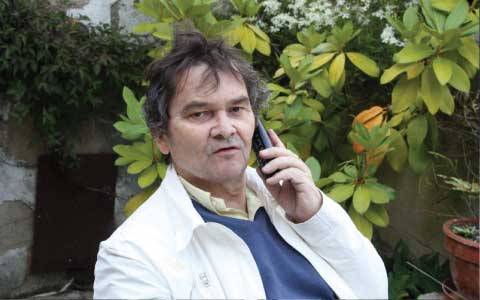 When i was in the Hopitâl Cochin in Paris last September visiting Horatiu Radulescu on what turned out to be the last evening of his life, a phrase kept going round my head and wouldn’t leave. It’s the title of his Third Piano Sonata, one of my favourites of his works: ‘you will endure forever’. When a dear friend dies the richness they have brought to your life does not simply evaporate; it is a permanent gift, a sort of immortality. So it is with Horatiu, who brought such fun, such colour, such joy, into my life. And such wonderful music. The title ‘you will endure forever’ is taken from the Tao Te Ching of Lao Tzu in the translation Horatiu loved by Stephen Mitchell, the text that inspired so much of his later music. Section 33 of the Tao Te Ching ends:

If you stay in the center
and embrace death with your whole heart,
you will endure forever.

Horatiu Radulescu was a man who stayed in the centre. He was totally unconcerned with fashions in the arts, with opportunism, with career-building. He was prepared to work hard to secure good performances of his music by interpreters he trusted. He could be pushy at times, and probably seemed arrogant to some; but what concerned him was making music, making art, of the highest integrity, and sometimes that effort involved a little pushing. In a composing lifetime of over forty years, and through 110 opus numbers – his total catalogue is much larger as many works exist in multiple versions – he created a body of music that is among the most courageous, most beautiful and most inspiring of the modern era. Early in his creative life Horatiu discovered the universe of possibilities within a single tone, the insight that led him to formulate his ‘spectral technique of composition’. He spent his life being true to that vision, to what he liked to claim was ‘the truth known to Pythagoras, to the Hindu mystics and to the ancient Byzantine chants’. These ancient verities – ways, he once wrote, of scrutinising the ocean of vibrations that is music – were values that he believed musicians must always strive to reanimate, to make relevant to their own time.

Horatiu was a fully contemporary artist and yet always struck me as a man who was not entirely of this world, who seemed to have a direct connection, a sort of hotline, to Lao Tzu, or Beethoven, or Leonardo Da Vinci. Horatiu’s Lucero Print, the publisher of his scores, is named after the Clos Lucé, the mansion in Amboise in the Loire Valley where Leonardo spent his last years. One of the many things I learned from him was that there was no contradiction between the ancient and the modern – that it was possible both to talk knowledgeably about the latest mobile phone and to love Josquin des Prez. On my various visits with him over the years we would discuss his radically new compositional techniques until my head was spinning; for example, a spectral tuning he had devised for string instruments that would allow them to play as high as the 641st harmonic. Then he would drive me somewhere (usually at high speed) and there would be CDs of Bach and Gesualdo in his car, or Beethoven’s Fourth Piano Concerto. He loved Michelangelo and Machaut, and the purity of Webern, Paul Klee and Georg Trakl. I found this connection – a love of the great traditions and yet a burning need to push ever forward – to be tremendously exciting.

Horatiu adored many kinds of music, from ancient traditions worldwide to the present day, and had a deep love of the traditional music of his native Romania. He found Beethoven ‘the Himalaya of our psyche’, especially the Beethoven of the late quartets, the Diabelli Variations and the Hammerklavier Sonata; but he also loved Wagner (especially Tristan), Schoenberg (Verklärte Nacht) and Strauss (Metamorphosen). Among the immediately preceding generation he had much good to say of Messiaen, Ligeti and Xenakis; he felt more ambivalent (though generally positive) toward Stockhausen, and had no time for Boulez. About his own generation it is probably best not to quote him; but then, few composers are all that generous toward the music of their peers.

Quite apart from music there was the delight of Horatiu’s language. To string players he would talk about little devils (his term for an irregular melody of very high harmonics at the bottom of the fingerboard); or u du ’u du (a special phase-shifting bowing technique he developed and used in many of his compositions); or alphorns (irregular melodies, very high on the string, sometimes in two voices simultaneously). He would occasionally use Romanian terms like doina, a style of music associated with Romanian shepherds, which he parsed as meaning longing, ‘to long with sound’. However mystical or exotic they sounded, these terms always meant something absolutely precise. There was a sort of mysticism, too, in Horatiu’s fondness for (and virtuosity in handling) the numbers that described the spectral harmonies of his music.

In everyday conversation he would reduce me to helpless laughter with some of the things he said, many of them quite vulgar but to me highly delightful. Anything that annoyed him, even a CD that refused to burn correctly, was a putain (a prostitute) and was dismissed with merda rossa! (red shit!). Things that he thought were stupid would elicit c’est la folie furieuse!, but things or people that pleased him would be described, with softly rolling ‘r’s, as corrrrect. He occasionally would describe himself as being in the cacapoufi (in the shit), as for example when he’d had a row with someone who wanted to commission a new work, or once when his credit card refused to give him money. On the phone he would insist on greeting me in Italian – ‘Salve Bob, come stai?’ – knowing full well that I don’t speak a word of the language; but it was so charming, so natural a way of conveying his love of the different sounds and rhythms of the many languages he spoke, that I couldn’t possibly object. (If he tried to call me and couldn’t get me he would generally leave messages on all three of my phones; I’m glad I wasn’t paying his phone bill. For Horatiu everything was urgent.) My partner and I had him several times to stay with us in Amsterdam, and we loved his company, no matter how demanding he could be of our attention, no matter how many cups of coffee he wanted me to make him all day long. On his last visit, which was five days in duration, he managed to get though the best part of four jars of honey, either in his coffee or as a sort of continuous amuse-gueule between courses. One night before bed, after a long day of exacting rehearsals on his Sixth String Quartet with Amsterdam’s Zephyr Kwartet, he sort of groaned; I asked him if he was tired and he replied, with his wonderful English pronunciation, ‘No, I am full of honney.’

Horatiu’s main contribution, as I see it, was nothing less than to help rethink the language, particularly the harmonic language, of modern music. Earlier composers had tried to base harmony more closely on the natural resonance of sound rather than on the falsifications of tempered tuning, but their efforts had only gone part of the distance. Messiaen, for example, made use of what he called a ‘chord of resonance’ based on the partials of a particular segment of the harmonic series; but their exact vibrational proportions are rendered almost unrecognisable in his music as the chord is quantised to the available notes of the tempered piano keyboard. Other composers introduced microtones – ‘the notes between the cracks’ – to try to address the limitations of equal temperament, but the resulting expansion of vocabulary was not always accompanied by a coherent grammar that would enable the ear to make sense of the result. Horatiu’s spectral techniques, as they evolved through the 1970s and beyond (independently from those of his French contemporaries Gérard Grisey and Tristan Murail) offer new ways of navigating the potentially infinite space of musical pitch relations. His compositional aim, as outlined in his book Sound Plasma (1975), was to bypass the historical categories of monody, polyphony and heterophony and to create musical textures with all elements in a constant flux. Central to this was an exploration of the harmonic spectrum, and the invention of new playing techniques to bring out the upper partials of complex sounds, on which new secondary spectra could be built. The harmonic relationships in his music are based on these spectra and on the phenomenon of sum and difference tones, psychoacoustical by-products of the behaviour of musical tones in the air.

For all his fluency in matters theoretical, Horatiu would be just as inclined to explain his ideas in poetic terms. In a passage from Sound Plasma he describes his ideal of a steady-state musical texture without disruptive elements in a beautiful metaphor: ‘Gaining and losing stars in the late evening and before dawn, we cannot determine a precise instant for it, and we enjoy a “trembling time” feeling.’ He was able in this way to open the door for some musicians to his particular musical visions. The titles of his pieces often have a kind of otherworldly quality that reminds you of the strange, haunted imagery of a Romantic poet like Gérard de Nerval or the melancholy, heart-stopping canvasses of Georgio de Chirico: Faint Sun, Late Universe, These Occult Oceans, Thirteen Dreams Ago, Twilight Intricacy, Capricorn’s Nostalgic Crickets. Horatiu’s world was full of a special sort of awe and a trembling excitement, a longing for the beauties of the universe, both outer and inner. His is music that makes your heart beat faster with glimpses of new universes still to be explored.