What is rock, really?

Definition rock. The name, freed from its 1950s accoutrements, with its capital letter and its Tetragrammaton status, perhaps now more fittingly emerges from the definition of the hard mineral, in its obstinacy, or the aftermath of an explosion, in its intentions.

Language Rock is an attack on language, or at least the precise function bearing on language. The rock lyricist – that queer amalgam – will attempt, with every sinew, to untangle language, to move down the parts of speech to the most primitive, to the most unencumbered possible level. Through the significant locution, down through the composite significant, the rock lyricist lands on the first part of speech: the indivisible, semantically meaningless sound or phoneme. Not all will make it: aging rockers display their betrayal of the art form through their elocution; popular (or populist) rockers through their comprehensibility. The history of the grunt in Rock will be a long and important document.

Rhythm and Rhyme Rock musicians need quickness, not speed. Most debutants are unaware of the distinction. The secret rhythm of Rock is not determined by beats per minute (one, two, three, four is a red herring) but by the rhyme of place and situation. The rock song exists simultaneously in the hazy memories of the witnesses in disparate locations the morning after. It follows that the truly impactful rock song should be invisible and inaudible at the moment of communication.

Poetry Poetry should be expurgated from Rock (see Rhyme above). The poetry that does, on occasion, infect Rock is a signal of the singer’s unsuitability for the role (regardless of who might have penned the words). The standard repertory of playing techniques in Rock – the high pitched vocal delivery, the interruptive gesture of the guitar, the volume level of the drum-kit – is designed to efface unfortunate occurrences of the poetic.

Friends The compactness of the rock song finds resonance in experimental, left-wing literary marginalia and techniques of the mid twentieth-century: Borroughsian cut’n’paste, the Ballardian condensed novel and Calvino’s Cosmicomics. Rock that denies, wittingly or unwittingly, these comrades-in-arms will become ‘pop’ or ‘metal’, or, even worse, ‘stadium’.

Family The rock musician should have no visible personal pedigree. It is essential therefore that the rock band be a surrogate family, functional or dysfunctional as you like, but one borne of coincidence rather than reproduction. The rock family is a synchronic conceptual entity in which fathers, mothers, sons and daughters have all been reduced, or elevated, to the same age.

Decoration The rock band is without decoration. Everything has function. The young man is the perfect agent in the rock band because his vanity is desperate, and therefore functional. Women play a valuable part in rock bands but they must be assigned foundational roles: drums or bass, never guitar.

Logic The logic of the rock band is hard: hard-boiled in its countenance, hard-pressed in its physics, hardbitten in its outlook, hard-shelled in its manner, hard core in its temperament, and hard-wired in its technique. The drum’s membrane should always be as tight as possible.

World view A world view in Rock leads ineradicably to pomposity. The true birthplace of Rock is the bedrooms of suburbia where ‘the traumas of weaning and potty training’ can be mined by the post-Freudian impulse. ‘The test of a language’ says J.G. Ballard ‘is how well it can be translated into other tongues, and sex is the most negotiable language of all.’

These observations come from spending a night at the Attic in Belfast’s famous music and sports bar Lavery’s Gin Palace. The highlight of the evening was the band Yes Cadets, a four-piece of intoxicating energy, innocence and intelligence. ‘Fashionista Art Party’ and ‘Charm Offence’ are songs that simultaneously promise and deny any form of meaningful communication. Recommended. 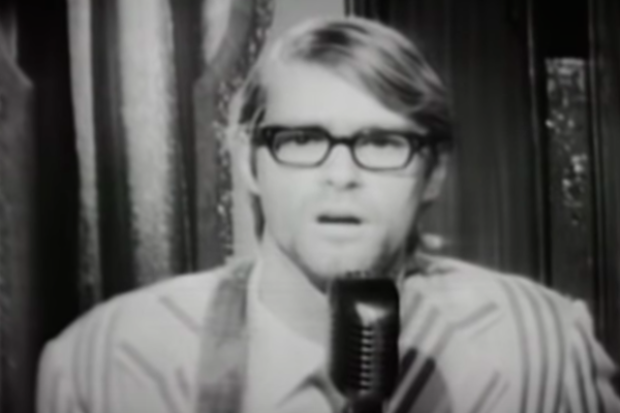