The concert will see Martín return to Deirdre McKay’s Meltwater, a work he premiered in 2009 on his first appearance in Ireland with the Irish Chamber Orchestra. Evocative in its spellbinding marriage of complexity and directness, it takes its inspiration from what the composer describes as ‘the desolate beauty of our planet’s most extreme and inhabitable landscapes’.

Mendelssohn’s rich, melody-filled ‘Scottish’ Symphony is one of the glories of musical Romanticism. Inspired by a holiday in Scotland’s highlands and islands, and by the country’s history and literature, it is as much a love poem as a heavenly hymn to the epic and picturesque time-sculpted vistas of Scotland.

Subtly laced with accents of traditional Scottish folk music, this Third Symphony is a graceful and stirring tour de force laced with all the bracing, panoramic grandeur of Scotland’s wild beauty and brimming with one memorable tune after another. 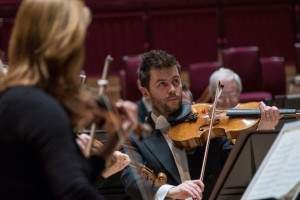