As part of the Tread Softly Festival 2019 The Model is delighted to present a unique and experiential performance by Yurodny Ensemble, created especially to mark the 60th anniversary of The Niland Collection.

Sailing to Byzantium is a major staged work by Turkish composer Onur Türkmen for the Yurodny Ensemble.

The piece focuses on parallels between the work of two great 20th Century writers: the Irish poet William Butler Yeats (1865 – 1939) and the Turkish poet Ahmet Haşim (1884 – 1933). Born in different places during the same period of upheaval, both poets lived to witness their nation fight for independence and shared many philosophical and aesthetic concerns, in particular a symbolist attitude towards modernism and an astute sense of the retelling of history through myth.

This performance especially created for The Model, on the occasion of the 60th anniversary of The Niland Collection and is the European premiere of the work, following its critically acclaimed first performance on April 25th 2016 at the Ankara International Music Festival.

Supported by the Arts Council / An Chomhairle Ealaíon, this performance features renowned musicians from Ireland, Turkey, Holland and the UK, working in collaboration with award-winning Irish lighting and set designer Sarah Jane Shiels. 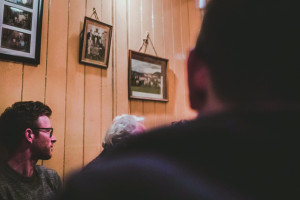