with live music by 3epkano

FOR ONE NIGHT ONLY

‘…one of the most fascinating concert experiences I’ve had.’ State

On Thursday the 22nd of August at 8pm, performing for the first time at Christ Church Cathedral, the acclaimed eclectic music ensemble, 3epkano, join forces with renowned singer, Iarla Ó Lionáird, to perform a live score to Paul Wegener’s 1920 spine-tingling classic, Der Golem. Having achieved cult status, this legendary film centres on an antique dealer who stumbles across a golem – a clay statue brought to life centuries earlier by a Rabbi. The dealer tries to use the golem as a servant, with terrifying consequences…

3epkano are a Dublin based collective, formed by Cameron Doyle and Matthew Nolan, who are dedicated to producing original soundtracks to silent, avant-garde, and contemporary cinema. Since 2004, the group have played numerous headline shows in both Ireland and the US to critical acclaim.

Iarla Ó Lionáird recorded his first album at the age of 12 and has never looked back. Whether as a member of The Gloaming or a solo artist, he has firmly established himself as “one of the most dramatic voices in contemporary music” (The Guardian), performing and recording music both traditional and self-penned and collaborating on a host of projects with artists such as The Gloaming, Gavin Bryars and Donnacha Dennehy. 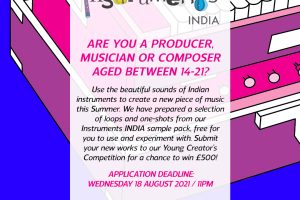