This celebrated partnership of “one of the UK’s most staggering and influential acoustic guitarists” (fROOTS) with “the doyenne of Irish harpers” (SCOTLAND ON SUNDAY) has presented its unique musical vision in twenty-two countries on five continents to venues ranging from the tiniest of village halls to palaces in Kyoto and Istanbul, London’s Barbican, Sydney Town Hall and the Philharmonie in Cologne. Chris has toured and recorded with many luminaries of the folk and jazz worlds, among them Boys of the Lough, Aly Bain, Diz Disley and Stéphane Grappelli, and Máire is a recipient of Irish music’s most prestigious award, Traditional Musician of the Year (Gradam Ceoil TG4 - Ceoltóir na Bliana).

Their Christmas show features a breathtaking blend of traditional Irish and Scottish music, swing jazz, bluegrass and baroque plus festive favourites given a fresh voice and performed in their characteristically soulful style – a spellbinding treat for mid-winter.

“A delightful... satisfyingly original, often refreshingly unpredictable take on festive favourites... Joyful, gorgeous and uplifting” THE LIVING TRADITION “Both are in the virtuoso class” THE GUARDIAN “Masterful playing... (ranging from) the entrancing and delicate to the wildly celebratory...” * * * * FOLK WALES “(Their) mastery and magic... produced a rapt response” THE GUARDIAN

More praise for the duo…
“An eclecticism and spirit of adventure that is quite thrilling” * * * THE TIMES “Dazzling virtuosity” DAILY TELEGRAPH “In a class of their own” * * * THE GUARDIAN “Music of fire and brilliance from the high-wire act in traditional music” * * * * THE IRISH TIMES ”Brilliant, innovative harping and guitar-playing of astonishing virtuosity and versatility” * * * * SONGLINES “Chris is amazing... one of our greatest musicians” BBC RADIO 2 “Blazing guitar and dancing harp” DIRTY LINEN (USA) “Remarquables de virtuosité et de grâce” TRAD Magazine (France) “Their stagecraft was masterly and their introductions informative and funny” THE CHRISTCHURCH PRESS (New Zealand) “Their blinding technique, sizzling Irish reels and hot jazz improvisation brought an extended standing ovation... Newman has the great gift of being informative and hilarious simultaneously” THE WEST AUSTRALIAN 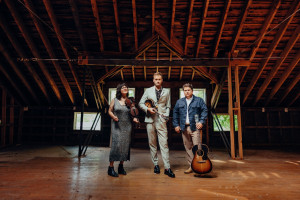 Funding
13 February
The Open Fund For Organisations
PRS Foundation
Added by: The Journal of Music Job
30 January
Head of Diversity
UK Music
Added by: The Journal of Music Job
24 February
Lecturer in Movement
Royal Welsh College of Music and Drama
Added by: The Journal of Music