Over two nights on 1st and 2nd November some 9 headline acts will perform in the intimate setting of St Mary’s Church as part of the Other Voices Cardigan festival which will be hosted by Huw Stephens and Kizzy Crawford, and is produced in partnership between South Wind Blows, Theatr Mwldan and Triongl.

Gruff Rhys, Celeste, Lankum, Gwenno and Boy Azooga are to be part of the headline acts. The artists will perform in front of a limited audience of ticket winners, with the performances being simultaneously broadcast to a number of screens in and around the town so that the local community and visitors to the town alike can share the experience.

An additional 30+ performances will also take place in a Music Trail at venues around Cardigan over the two days.

For further information and to register for a wristband registration visit www.othervoices.ie. Wristband holders will automatically be entered into a draw to win prized admission tickets to the performances at St Mary’s Church. Tickets will also be allocated via competitions in media and social media, check @OtherVoicesLive for details.

Other Voices Cardigan is staged with the support and investment of Welsh Government and The Department of Culture, Heritage and the Gaeltacht, and is produced by South Wind Blows in partnership with Theatr Mwldan and Triongl. The event will be filmed by Triongl for later broadcast on S4C.

Gruff Rhys
Gruff Rhys is a Welsh musician, composer, producer, filmmaker and author. His new album ‘Pang!’ is a Welsh pop album with a couple of verses of Zulu and an English title - a solo album of songs by Gruff Rhys, produced & mixed by the South African electronic artist Muzi.

Celeste
Summoning the spirit of soul singers, 21-year-old Celeste’s emotional and heartfelt music touches on the emotional poignancy of growing up, leaving home, unrequited love and finding your place in your family.

Gwenno
Gwenno Mererid Saunders is a Welsh musician born to Welsh and Cornish parents. Her second album, Le Kov (The Place of Memory), was released by Heavenly in early 2018. Created alongside long-term collaborator and producer, Rhys Edwards, it is an exploration of the myths and drolls of Cornwall, and the history of the survival of our lesser known Brythonic language, and is sang entirely in Cornish, discussing colourful themes of Cornish identity and history through the years.

Boy Azooga
Wales’ Boy Azooga is piloted by Davey Newington, heading up an ensemble that swings smoothly from filmic instrumentals to a churning, rave-tinged rock. 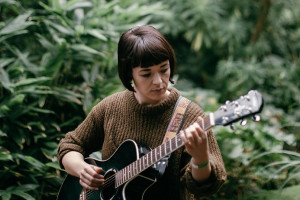