Homebeat is so thrilled to present two of the key artists who have been cornerstones of our ten-year adventure in music - Grandbrothers and Christian Loffler - for a very special, once-off audio-visual extravaganza in the wonderful surrounds of the National Concert Hall.

Erol Sarp and Lukas Vogel met while studying audio and video engineering in Düsseldorf. the two started to work on a project that combined both Sarp's piano skills and Vogel's passion for programming and mechanical apparatus. and that’s when Grandbrothers started.

The concept has been the same since day one: how far can you go by using only one single instrument? that’s why every single sound you hear on any Grandbrothers track comes from the same source: the grand piano.

Limiting themselves has been pushing the creative boundaries of Sarp and Vogel for more than a decade now and the two are sure that there’s much more to be found, written, recorded and performed. Apart from working in the studio to find new ways of creating sounds with their very unique approach, touring and performing live is a totally different thrill.

A Grandbrothers show is an audio-visual experience for both the performers and the audience. their unseen „four-handed approach” and the emotional, melodic and even danceable merge of analogue and electronic sounds allowed Grandbrothers to perform on stages, clubs and philharmonic halls all across Europe ever since.

So far Grandbrothers have released three albums "dilation”, "open" and "all the unknown" (Jan 15). in 2019, they also released their first movie score "hors nomes".

Located on the Darss peninsular, overlooking the southern coast of the Baltic Sea is a log cabin, nestled among the jungle-like overgrowth of surrounding birch and willow trees. The cabin is Christian Loeffler's atelier, where he locks himself up to work on both his visual art and his music. In the centre of the room is a huge oak table, splotched with multicoloured oil paints, surrounded by canvases, cameras tripods, tools, and brushes.

There's a great view of the sea, and the wide patio windows allow the light to flood inside, casting shadows of the leaves and branches across the walls and onto the table. There's a small fireplace which allows him to work during the winter so that he can continue his introspective creative process during the cold months too. The place is very basic – working, sleeping, cooking, all in one room; yet it's these modest and in some ways rudimentary parameters that allow Loeffler to make sincere and honest music, concentrating on just the essentials. 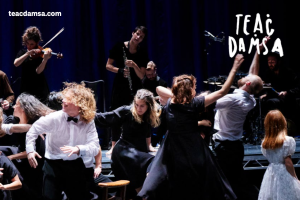