On Thursday 17 December at 12pm, Irish National Opera’s 20 Shots of Opera series, featuring 20 new compact operas by composers in Ireland, will be available to view for free online.

One of INO’s largest projects to date, 20 Shots… was borne out of the exceptional circumstances of the pandemic.

The series will be launched at 5pm on Thursday with a 50-minute streamed panel discussion featuring series director Hugh O’Conor, singers Gavan Ring and Naomi Louisa O’Connell, and composers Emma O’Halloran and David Coonan. There will also be a preview of a selection of the operas with commentary from the artists involved.

Laundry dilemmas and ecological collapse
Presented with the RTÉ Concert Orchestra, the 20 operas were newly commissioned by INO for casts of one or two singers and an orchestra of up to eleven players. Their subjects embrace everything from Beethoven’s letters about troublesome servants and laundry dilemmas (Gerald Barry) and a response to a terrifying walk through a Covid Hot Zone (Andrew Hamilton) to the challenges of dating during lockdown (Hannah Peel), the true story of a wartime shipwreck of a boat carrying sex workers (Gráinne Mulvey), an Irish-language opera exploring times of rift and rupture (Linda Buckley), and a ballad of extinction, biodiversity loss and ecological collapse (Benedict Schlepper-Connolly).

‘I wanted a project that would involve a huge array of Irish talent,’ says Sheil. ‘Composers, writers, singers, instrumentalists, directors and designers. But one where everybody would work in small groups or on their own. Something that would be both small and large at the same time. Something that would be resilient as a project and not easily fall victim to the fluctuations of future circumstances. I think of it as a huge, collective act of creativity and defiance.’

See the full list of operas below. The operas will be available to view on the INO’s YouTube channel from 12pm on Thursday 17 December and the launch is at 5pm the same day. For further details, visit www.irishnationalopera.ie/whats-on/current-upcoming-productions/20-shots-of-opera

Gerald Barry (music) | Ludwig van Beethoven (words) | Mrs Streicher
Gavan Ring tenor | Stephen Irvine tuba | Gerald Barry director
A setting of letters Beethoven wrote to Nannette Streicher about his laundry/food/servant problems. He whips himself into a frenzy of paranoia and is even able to make unfavourable comparisons between his maid’s poor behaviour and Christ’s suffering on Golgotha.

Robert Coleman (music) | Mark Boyle (words) | The Colour Green
David Howes bass-baritone | Holly Keating animator | Hugh O’Conor director | Fergus Sheil conductor
Mark Boyle, having given up technology for a life in rural Galway, meditates upon his daily rituals; of writing by hand and the ease to which sleep finds him.

Peter Fahey (music) Trad., adapted Peter Fahey (words) Through and Through
Daire Halpin soprano | Anabelle Comyn director | Fergus Sheil conductor
A traditional ballad reimagined as a kind of fairytale in which a noblewoman murders her lover, is taunted by a magical talking bird (who has witnessed the crime) and, ultimately, is accused of witchcraft and burned at the stake.

Michael Gallen (music & words) | At a Loss
Orla Boylan soprano | Michael Gallen director | Fergus Sheil conductor
A woman sits awake in a screen-lit room, awaiting news about her mother’s imminent passing. Tuning into the tides of electrical hum around her, she wonders about the parallels between this power and the force that gives life to the body.

Hannah Peel (music) | Stella Feehily (words) | Close
Rachel Croash soprano | Raphaela Mangan mezzo-soprano | Sarah Baxter director | Elaine Kelly conductor
Sam and Andi have been Zoom dating during lockdown but today they are meeting for the first time. Is it okay to get close?

Karen Power (music) | Ione (words) | Touch
Naomi Louisa O’Connell mezzo-soprano | Gyula Nagy baritone | Jo Mangan director | Fergus Sheil conductor
A solitary man and woman become aware that their separate worlds consist of uniquely enclosed environments, in which the sounds of five words are their only means of communication and perhaps their only means of escape. 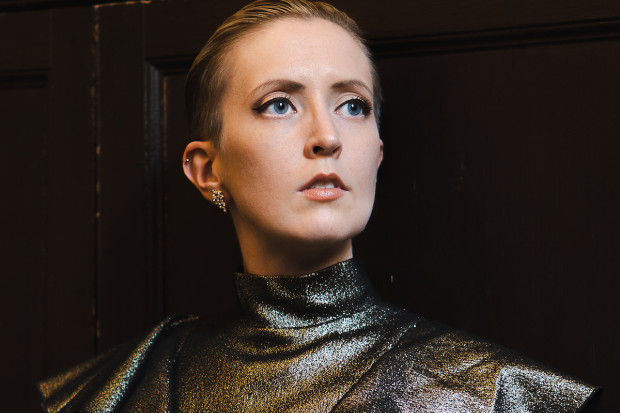