Uilleann piper David Power will give the world premiere of a new concerto for pipes and orchestra on 2 March as part of the 2018 New Music Dublin festival.

The work, titled Gol na mBan San Ár, will be preceded by the Irish premiere of Korean composer Unsuk Chin’s Šu for sheng (with soloist Wei Wu) and orchestra. The performance, featuring the RTÉ National Symphony Orchestra, will take place at the National Concert Hall.

Power, from Waterford, recently collaborated with Linda Buckley on the work Antartica at the Kilkenny Arts Festival and also toured with the Edges ofLight show featuring Tola Custy, Maeve Gilchrist and Colin Dunne. He regularly performs with Martin Hayes and has featured on the Masters of Tradition international tour.

This is the second time that Volans and Power have collaborated together following the composer’s arrangement of a work for Power and harpsichordist Malcolm Proud. Volans, renowned for his internationally successful quartet White Man Sleeps, recently had a CD of his orchestral music released on the RTÉ Lyric FM label, described in The Journal of Music as ‘awaken[ing] a new excitement about the symphony orchestra as compositional vehicle’. In 2016, his works for violin and piano were released on Ergodos. Last October, his work for piano, L’Africaine, was premiered at the London Piano Festival.

Five concerts announced
The concert is one of five that New Music Dublin has announced so far.

On Thursday 1 March at the NCH, the RTÉ Concert Orchestra will perform Deirdre Gribbin’s composition for percussion and orchestra, Goliath, with soloist Toby Kearney, conducted by Ryan McAdams. The orchestra will then be joined by the RTÉ Philharmonic Choir for James MacMillan’s Credo, conducted by the composer.

On Friday 2 March at St Ann’s Church, Dublin, Chamber Choir Ireland and the Irish Chamber Orchestra will perform the Irish premiere of MacMillan’s Stabat Mater, again conducted by the composer.

Experimental band THIS IS NOT THIS HEAT will be reforming after 40 years for a performance on Saturday 3 March and will be joined by Daniel O’Sullivan of Grumbling Fur.

On Sunday 4 March, the RTÉ National Symphony Orchestra will perform the world premiere of David Fennessy’s Conquest of the Useless, featuring the composer himself on electric guitar.

Any festival that embraces the outer-edge rock experimentalism of THIS IS NOT THIS HEAT with as much delight as it welcomes the classically founded choral intensity of James MacMillan’s Stabat Mater – and everything in the very, very wide-open field in-between – is going to welcome everyone who comes along with an open ear and an inquisitive mind.

New Music Dublin 2018 will present a programme of world premieres, concerts, talks, walking tours, films, and children’s workshops, featuring Irish and international composers and musicians. The full programme will be announced this month. 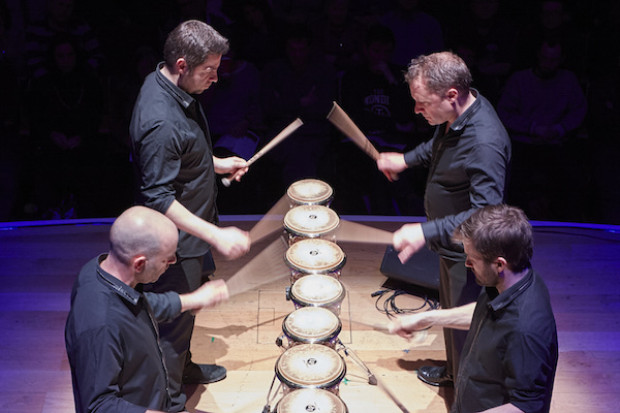