Songs of the Scribe Sung by Pádraigín Ní Uallacháin

Pádraigín Ní Uallacháin has just released a CD called Songs of the Scribe, arising from her work at the Seamus Heaney Centre for Poetry, and featuring ten new songs derived from ancient writings. 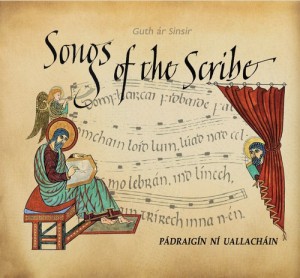 Currently Foras na Gaeilge Traditional Singer in Residence at the Seamus Heaney Centre for Poetry at Queen’s University, Pádraigín Ní Uallacháin has just released a CD called Songs of the Scribe, arising from her work at the Centre, and featuring ten new songs derived from ancient writings. Speaking to The Journal of Music, Ní Uallacháin described it as more a creative than a strictly academic project: ‘Primarily, I wanted to open a window on a wonderful world that is made somewhat inaccessible by the fact that the texts are in Old Irish.’

Some of the lyrics derive from the texts Irish poet-scribes wrote in the margins of manuscripts between the sixth and the twelfth centuries. These, often in strict syllabic meter, represent some of the first examples of personal poetry in Ireland, and have been a source of inspiration for many contemporary poets, including Seamus Heaney and Ciaran Carson whose work is included on this CD. Heaney has elsewhere praised the ‘tang and clarity of a pristine world of woods and water and birdsong’ they are capable of imparting.

Others track are poems, dramatic incantations and chants from an earlier tradition delivered here by Ní Uallacháin in song with sean-nós ornamentation.

Early wire-strung harp, vocal drones and contemporary arrangements combine with the words and melodies, in what Ní Uallacháin hopes is a world of ‘simplicity and stillness, contemplation, and delight in nature’.

As part of her residency at the Seamus Heaney Centre for Poetry, in conjunction with harpist Helen Davies, Ní Uallacháin has already sung many of these songs overseas including in Delhi, Paris, Calcutta, Roskilde, and more touring of the material is in planning for 2012.