Lankum on stage during ‘A National Disgrace’.

Ghosts in the Theatre

It was during the second performance of Sean O’Casey’s The Plough and the Stars in 1926 that a riot broke out, causing playwright W.B. Yeats, famously, to take to the stage and declare to Ireland’s theatre-goers: ‘You have disgraced yourselves again. Is this to be the recurring celebration of Irish genius?’ What we wouldn’t give now for a riot in a theatre.

This past Saturday night (15 August), Lankum paid homage to one of Ireland’s most infamous culture-shocks with an evening of live-streamed music, theatre and comedy. Beginning with a taxi journey dropping us at the corner of a bustling Abbey Street, we’re welcomed by the Abbey’s ghostly usher – played brilliantly by Sean Fitzgerald – and shown to our seat.

‘Please take notes of your nearest fire exit,’ the disembodied voice of Andy The Doorbum tell us. ‘Please remember to switch off your mobile phone’. The first social pang of the evening.

As the curtains rise, there’s no mistaking the palpable longing for applause. It seems unnatural, eerie even, to play to such an old, empty house. But this is the reality of the arts now. It’s a lonely stage. Where once there were bodies, now there are broadcasts. It is no wonder the night highlighted ghosts both in the theatre and the droning melancholy of the machine.

On The Livelong Day, Lankum are in conversation with tradition. Tonight, they share the stage with the past in a setting that is oh-so-present. Our curiosity forces us to look past the empty red seats for the bodies that are in the room; the musicians, of course, but also the camera crew, the lighting and sound techs, the producers and managers. The spectrum of arts workers roaming around an empty theatre, a sign of the times.

The words ‘End Direct Provision’ sparkle in adhesive jewels on the body of Darragh Lynch’s guitar, in a week when the living conditions of asylum seekers in Ireland has been heavily criticised as inhumane. Lankum are ensuring that while they have the stage, what needs to be said is said.

‘The Young People’ – the second song of the evening – sounds as bittersweet as ever; ‘when the young people dance / they do not dance forever’. The song is a masterful balance of hope and despair, of death and its hold on lives left behind. Ultimately, it is an ode to friends who are both here and gone, which, given the circumstances, borders on cathartic.

A history of hurt
Their take on ‘The Wild Rover’ – which has fast become a live favourite from the group – is startling in its commitment to its mood. Panicked horror-stricken tones from high strings and droning harmonium circle Radie Peat’s intense, pointed vocals. There is a history of hurt, of discontent, of fighting breaths in the performance, and where it doesn’t look back in sorrow, it looks around at the chaos and loss of present times. There are few songs quite like Lankum’s ‘The Wild Rover’; a vital, angry, pleading ode to our country’s particular hardship.

Conversely, ‘The Pride Of Petravore’ offered the most jovial and hopeful moment of the night. Cormac MacDiarmada’s fiddle leads the charge in a fit of melodic fury. There is a moment when the camera pans out for a full view of the stage, and all present musicians are seen together, tapping their feet furiously in time, breathlessly drawn around the pace. If there was a moment of true longing for the embrace of a crowd, this is it.

A tour of the Abbey’s backstage is uncanny, almost Lynchian in mood. Tony Cantwell’s prop-room ghost was genuinely funny, and rap group Kneecap brought intense, harsh energy to a small back-stage changing room. The Mary Wallopers, propped at a provisional bar in the recesses of the theatre, are as charming as ever, and Natalia Beylis’ noise-making on a sewing machine is another ominous beacon of these times

Though viewed through our screens from home, a community found itself online throughout the performance. The hashtag #ANationalDisgrace trended in Ireland for the duration of the stream, flooded with smartphone photos of televisions and laptops, some watching with family and friends, others watching alone. Before the show, I texted with a friend – another music journalist – pretending to decide on a spot near the Abbey to meet for a drink, promising to see each other at the bar intermission. I don’t know when we will have those kinds of conversations again, but it was nice to pretend for an evening, to be humoured in our longing for real-life, honest-to-God culture with friends. 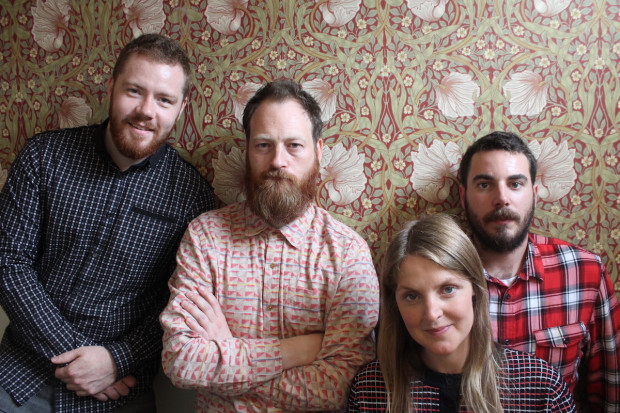