In the summer of 2019, David Balfe released his debut album 'For Those I Love' for a brief period before it disappeared from streaming services. After months of hype, it was finally released in March of this year. Andrea Cleary reviews.

‘A year ago or so, I played this song for you on the car stereo in the night’s breeze,’ David Balfe says, around halfway through the opening track of his debut record, For Those I Love, from within the space of the very song he’s speaking about. ‘This bit kicked in with its synths and its keys, and you smiled as you sat next to me’. The ‘you’ he’s speaking to is his long-time friend and musical collaborator Paul Curran, who tragically took his own life in 2018. Memory and grief overlap, the nostalgia of bedroom garage music overlayed with WhatsApp voice messages and phone-calls, memories digitised and stored, tantalisingly close to the real thing, but only ever echoes of memories past.

In the summer of 2019, Balfe released For Those I Love for a brief period of time. Those who managed to catch sight of the buzz on blogs, in WhatsApp groups and on Twitter quickly became enamoured with its stark portrayal of love, grief, loss and memory. The album was removed from streaming services, anticipating a wider release on the UK label September Recordings, but many sites dug in their heels and went ahead with listing the record atop their Album of the Year rankings when December came anyway. It was a flash in the fire, a spark that ignited the buzz, and few who managed to hear it then could get it off their minds.

In the interim there was Into A World That Doesn’t Understand It, Unless You’re From It, a limited edition (only 50 were made) 47-minute cassette, sold on the artist’s Bandcamp page (billed as For Those I Love Radio), before disappearing once more.

It wasn’t supposed to be this way, this release steeped in mythology and suspense, shrouded in mystery. Balfe only ever intended the album to be heard by his friends, pressing just a handful of copies and handing them out to those closest to him; those who understood and knew and loved Paul Curran. But in September, a music video for ‘I Have a Love’ surfaced, replete with archive footage of Balfe and Curran together, shot in the monochrome style of Burnt Out, the artist collective that the pair were part of, which shone a light on working-class experiences in Dublin. It was reminiscent too of the video for Curran’s heart-wrenching poem ‘Drive’, which pays homage to one young man who died while mourning a friend, driving in a car with a group of friends, listening to Omar Souleyman in a battered tape-deck. Balfe nods to this poem on his cassette tape too, and again in the final track of this album, ‘Leave Me Not Love’, and the sense is that the more you dig through the back catalogue of this collective, the richer the tapestry of voices, experiences and perspectives.

Later with Jools
But back to 2020, and Balfe’s first televised performance as For Those I Love – on BBC’s Later… with Jools Holland – is shot in Smock Alley theatre due to travel restrictions. A cursory glance at the YouTube comments throws up repeating sentiments – honest, raw, moving, passionate, unforgettable. Balfe’s story is finding an audience beyond these shores. It’s a bitter-sweet moment for him, and he later tells the Irish Times’ Una Mullally that the traction the project is receiving makes him feel ‘monstrously guilty’. Balfe also performs at Other Voices, about which Mullally, in that same piece, writes of the emotional fallout, for those lucky enough to be present; ‘We have just witnessed something that doesn’t even feel like a gig,’ she writes. ‘It’s something else. I feel like I’m on the precipice of a panic attack, but one shrouded in gratitude.’

We won’t hear from Balfe properly again until the release – the real one this time – of For Those I Love, in March 2021. Whatever the whispered plaudits, whatever the buzz, nothing can really prepare you for a record like this one.

Balfe has spoken about how art is the language through which his friends communicate, and how For Those I Love uses this language to understand and process grief. His production work on this album is outstanding; samples ranging from Sampha to The Happenings, The Clancy Brothers to Smokey Robinson; some overt homages, others hardly distinguishable as their original forms, like they’d always existed in this space of liminality. Like memory, sounds warp and bend to his hand, and there are moments on the record – the pitched-up sample from Barbara Mason’s ‘Everything I Own’ on ‘To Have You’ jumps out – where the comparisons to the likes of the artist Burial are earned. It takes over from an audio recording at the start of the track, where we find the group of friends in disbelief that they managed to make smoke bombs from tinfoil and ping-pong balls. ‘It still fills me heart and breaks it,’ Balfe said of that recording on Twitter.

Moments of humanity
How these samples and recordings weave together, as though they never existed separately, reflecting existential fleeting moments of humanity, is the true wonder of this project. Buried and unearthed from the mix are snippets of songs shared and loved by friends, happier times crashing into the searing pain of grief, voices so close you feel you could reach out and touch them. Worlds are built and shattered; existential, fleeting, panicked.

And then there’s Balfe’s voice, rooting the ethereal euphoria in red-garden sheds, warehouse raves and ‘the weight of the city’s hate’; a burning couch in a housing estate; a fire that tears through a parked car; the white-hot heat of memory overlapping in a blinding, burning inferno. Masculinity and love don’t compete for space here, but stand side by side as pillars; there is so much love in the play-fights, the harsh words, the boredom and destruction that comes from being alive – where memories of violence are uttered in the same breath as the words ‘I will love you beyond life’.

There is anger too. That Balfe’s voice has resonated beyond these shores is not a surprise, but this is an album that holds a mirror up to modern Ireland, and the harsh truths that reside within; wealth disparity, class oppression, exhaustion. On ‘Top Scheme’ he is battle-ready, sick to the back teeth of statistics and broken promises. ‘How can we not feel this rage?’ he demands. ‘When the therapy costs more than half your wage?’; ‘Your Da crashed the bank but kept his job’; ‘You joke about the junkies, addicts that get dehumanised because they’re poor’.

But above all, as the title of the project suggests, there is so much love. In the final track, Balfe returns to tell us once more that he has a love, and it is filled with pain, shame, memory, fear; it ‘never fades, never shakes, never moves, never breaks’. He tells us about how he found an old song on Curran’s MySpace page, how it spoke to him with truth. Balfe, throughout the project, but especially here, has shone a light on loss in the digital age – how modern grief is not just formed by memory, but by the almost-tangible artefacts of voice notes, phone-calls, videos and songs. How they comfort through the healing, how they complicate it.

‘You lifted us from the mundane,’ he says to his friend Paul, and when I reach the final moments of the album, I can’t help but think that David Balfe has done the same.

To purchase For Those I Love, visit: https://forthoseilove.terriblemerch.com/ 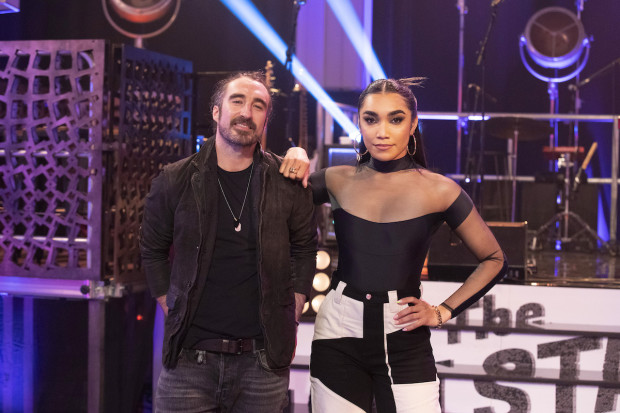 Are We Taking Enough Risks with Irish Music on TV?
Andrea Cleary
'The Main Stage', a new music show on RTÉ One, ran for six episodes from July until August this summer and featured artists such as Cormac Begley, Denise Chaila, The Scratch and Tolü Makay. Andrea Cleary reviews.