Donnacha Dennehy introduces Crash Ensemble at its 20th birthday concert at the NCH.

On 24 and 25 November, the Crash Ensemble returned to the National Concert Hall to celebrate their 20 years as one of Ireland’s most innovative new music groups. The concerts also marked the conclusion of their ‘Crashlands’ project which involved the commissioning of twenty new works by Irish and international composers that were premiered in various locations around the country. Part of this venture included filmmaker Brendan Canty and poet Doireann Ní Ghríofa, commissioned to produce work that responded to the idea of new music being performed in places that it wouldn’t ordinarily reach. The project included outdoor performances at sunrise and sunset; concerts in unusual settings such as wind-swept piers in Inishbofin and a performance by a holy well in Clonmel where the audience included some of the local livestock.

Of course, the downside to all of this is that the prospect of a work being premiered in such circumstances will not necessarily motivate a composer to labour tirelessly for months on end to produce a short birthday offering. What was quite apparent from listening to all twenty pieces over the course of two nights was that many of the better works came from the less well-established names who were obviously grateful for the commission while some of the bigger names misfired and produced pieces that clearly they didn’t spend too much time on. Whatever about the quality of some of the commissions, the project’s goal of bringing new music to the countryside was an imaginative and much needed endeavour as the bulk of this music continues to be exclusively reserved for citizens who happen to reside in the capital.

Music for Donkeys
Friday night got off to a positive start with Andrew Hamilton’s Music for Donkeys Who Like Music. This began with one of the best openings of the evening: a declamatory gesture in unison whose very rawness instantly captured the attention. It proceeded to plot out a meandering line that had no right to be as compelling as it was: remaining in unison with the timbre of different instruments crescendoing to the surface. This could easily have gone on for much longer while the second half was dominated by one of those cheap and cheerful pound-shop gestures so beloved by Hamilton that resulted in a pleasantly jarring contrast.

This promising opening was followed by a sharp dip in quality with David Lang’s Super Chill. The title suggests that Lang was perhaps a bit too relaxed about this commission consisting as it did of little more than a few Tinker Bell fragments in counterpoint that circled each other aimlessly and failed to generate anything of interest.

Roger Doyle’s UX1/UX2 consisted of two highly contrasting parts. UX1 was a tumult of cartoonishly atonal lines for clarinet, cello, piano and bass guitar that chaotically cascaded over each other in counterpoint. This all seemed pleasantly tongue-in-cheek until it was overtaken by UX2, an ethereal electronic piece whose shifts in timbre were synced to the changing shadings of colour in the video projection behind the ensemble that made for an otherworldly contrast.

I can’t decipher Morse code but if I could, I imagine I would have heard the word C-R-A-S-H or ‘twenty’ or other words/numbers relevant to the occasion tapped out during the course of Peter Adriaansz’s Crash Codes. This was the most imaginative of the pieces that were ostensibly cast as birthday offerings for the ensemble. At the beginning of the piece, each of the various ‘codes’ was tapped out utilising a single repeated pitch doubled in unison between pairs of instruments. When combined they generated a complex cross-rhythmic texture whose unassuming intricacy concealed how intensely difficult this piece must have been to perform.

Sean Clancy’s Eleven Lines of Music Slope Down and Eventually Stop continued his exploration of various amounts of lines which do exactly that. Clancy does have an ear for a catchy melody and when combined in bursts over a repeated ground bass they can produce quite a striking texture. However the tendency to stubbornly stay rooted in the same key for the entire duration limited the appeal for this particular critic.

Further catchiness was evident in Paul Landsky’s Audacity whose recurring main riff wouldn’t have sounded out of place in a police chase from a 1950s noir detective movie. The generic material that functioned as padding between this riff was less memorable however.

Linda Buckley’s Chrysalism for violin, viola, cello and double bass stood out amongst all the works on the night for the direct expressivity of the opening violin melody as well as for exploring a harmony that went beyond a limited collection of pitches. The combination of both gave some moments of genuine beauty.

Michael Gordon’s Cake had a far more interesting texture than the piece by his Bang on a Can colleague, with the main guitar riff being particularly catchy, but as with Lang’s piece there’s not really much more that one can say about it.

The stand-out piece of the evening for me was Ann Cleare’s FIÁIN for violin, viola, cello, electric guitar and bass with the latter two instruments played Jimmy Page-style with violin bows. As is typical of Cleare’s work, the piece explored a range of extended techniques in order to generate a vertiginous texture that pushed the exploration of timbre to an extreme. The really striking thing about this piece however – quite apart from how abrasive it sounded in comparison to everything else on the programme – was how it managed to channel the various noises into something so intensely expressive.

Ed Bennett’s Accel… was by far the best of all the post-minimalist style works on the first night. It started out as an oscillation back and forth between two chords amidst a texture of pulsing strings and sustained notes on the woodwind and trombone. This oscillation was progressively distorted by a trombone glissando and the piece built to a well-sculpted climax/collapse that brought Friday evening’s concert to a satisfying conclusion. 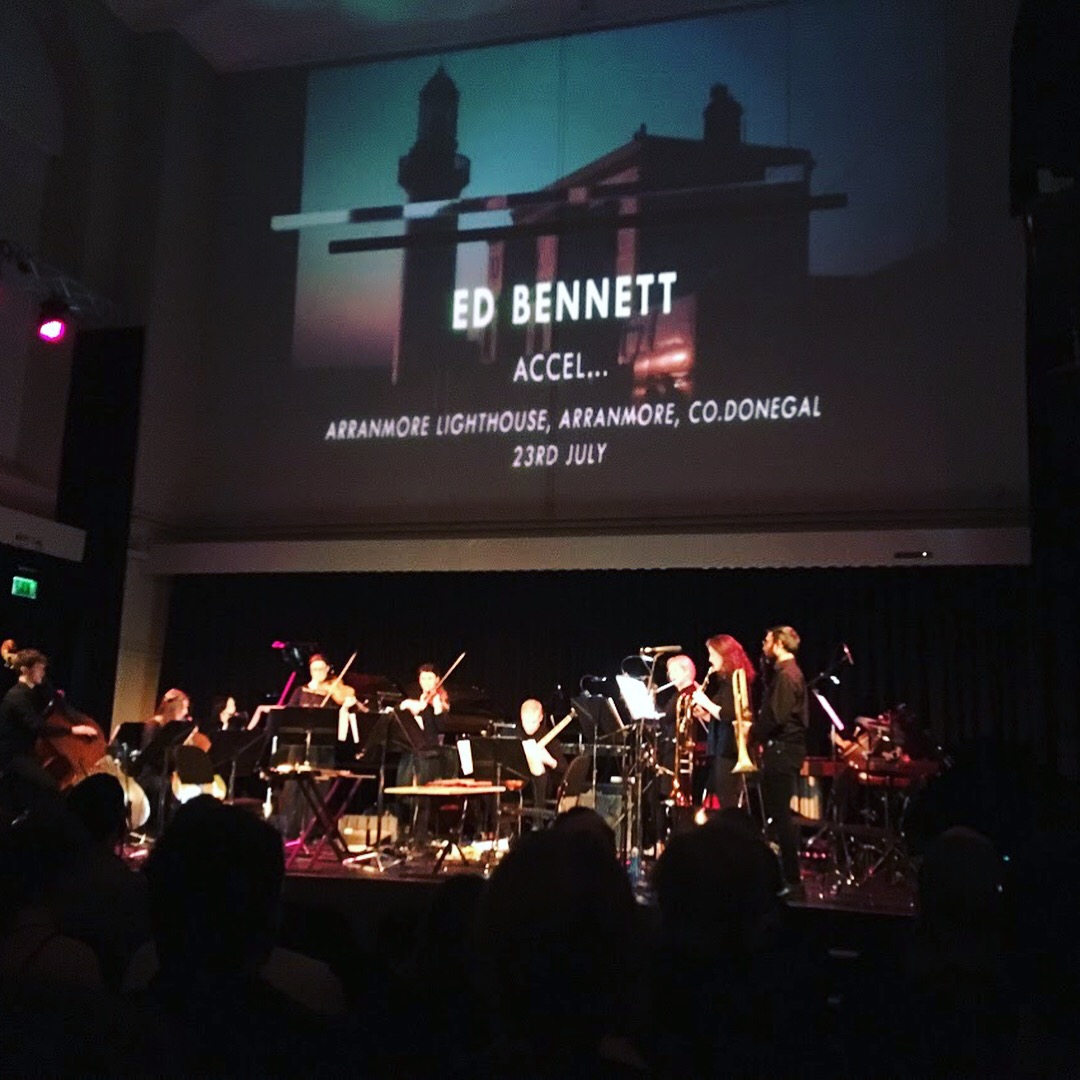 Barry’s Crashes
Saturday evening’s concert didn’t quite have the same quality as the Friday night despite the presence of some big names. It opened with Gerald Barry’s Chorale which featured the familiar Barry calling card of chords in plodding crotchets. The only thing redeeming this back-of-a-postcard effort from Ireland’s most well-known composer was the extended solo for clash cymbals. The percussionist Alex Petcu was handed the easiest assignment of his career to date to bash out a series of comically mundane ‘crashes’ that were surely intended to ‘symbolise’ the Crash Ensemble’s many years in existence. Curiously enough, there seemed to be more than twenty ‘crashes’ which must have a profound significance that only Barry knows the real meaning of!

This was followed by a staggeringly poor piece by Nico Muhly entitled In as long as it takes. In any event, this repetitive wallpaper thankfully didn’t take very long at all and flew by so fleetingly that it failed to etch even the faintest inscription on the aural memory of this reviewer.

Amanda Feery’s Vultures for strings, percussion and tape marked the first substantial piece of the Saturday night fare. The atmospheric harmonies of this piece managed to generate an ethereal soundscape that was quite engaging.

Julia Wolfe’s A Wild Furze might have been quite nice as the score to the intro scene of some depressing film but as a piece of music it contained little of interest and the attempt at a climax towards the end – cue tremolandi and a crescendo – would have shamed even Rossini.

And now for something completely different: Jennifer Walshe’s Pale Dogwood and Rose Quartz. This piece had the Crash Ensemble personnel posing as a bunch of selfie-obsessed narcissists while pronouncements from an accompanying tape intoned lines such as ‘The performance of happiness on social media is always rewarding’. The video behind displayed various shots of rose-tinted imagery making a thought-provoking and clever piece of light-relief that was nicely programmed in the middle of the set.

Of all the big beasts that received a Crash commission, Kevin Volans was the one who produced the best work. His piece cleverly used a restricted set of pitches contained in the title C.Roll.A.eS.H – or so I assume – as material which was subsequently developed with Darmstadt-like efficiency and discipline into a compelling texture of points and lines that stayed in the same place but never lost interest.

Quite the opposite was the piece which followed – Kate Moore’s Music Box – which consisted of a fragment repeated mechanically with minimal variation that alternated with a fairly generic cross-rhythmical section for the strings.

Saturday’s night’s highlight was Tansy Davies’s Antenoux; a riff-laden concoction of abrasively spiky lines on the electric guitar and bass with fragments of expressionist string writing and free jazz from the trombone thrown in for good measure resulting in a highly combustible mix.

After this highlight, there was little to get excited about in Naomi Pinnock’s Between which sounded like a bad imitation of Morton Feldman’s worst music – a dreary series of mildly dissonant atonal gestures separated by silences.

To cap off the evening and the 20th birthday celebration was a work by the Crash Ensemble’s founder and current Artistic Partner Donnacha Dennehy. His piece Canons and Overtones was the most substantial piece in terms of length and compositional complexity. It consisted of several contrasting sections that explored canonic writing to various degrees of textural density and had a much greater range than any of the other pieces based on repetition.

As for the Crash Ensemble themselves, no matter what style they were performing, it was lavished with the usual degree of care and attention which should surely secure them plenty more years as Ireland’s most versatile contemporary ensemble.