Art of the Defeated

The inanity of commissioned music today is shocking, writes Peter Rosser, and for the radical, questioning artist, freedom means being cut adrift from employment. How did we arrive at this point, and what can be done about it? 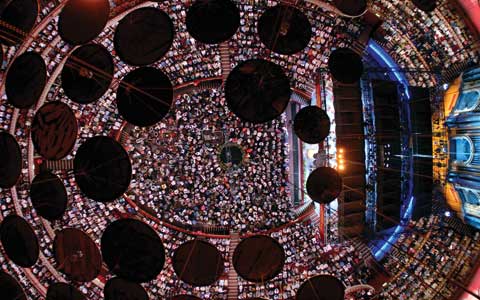 The BBC Proms: view from above

My focus is the North of Ireland, and, as in so much of the debate around what we call contemporary cultural, I feel that we have to go back to the late 1960s to determine how we’ve ended up where we have. The last few years of the 1960s were tumultuous in Ireland. In 2008 we remembered Bloody Sunday, forty years on, and in the summer of 2009 the newspapers were full of the 1969 Battle of the Bogside and the ‘official’ start of the troubles, and the British Army ‘Operation Banner’ that lasted for thirty-eight years. But what is so often seen as a historically complex but essentially local problem was, of course, an expression of a world that had polarised in dramatic ways.

It was war in the 1960s, no doubt. It was left versus right, the old guard versus the new, the forces of the establishment versus the forces of the revolution; the battling parties clearly defined and with dedicated purpose. In music this dissonant energy sparked the shocking genius of figures such as Jimi Hendrix, and bands such as the Velvet Underground. 1968 also saw the release of Astral Weeks by Belfast’s own Van Morrison. Composers were similarly energised: Stockhausen’s Stimmung, Xenakis’ Nomos Gama, Crumb’s Songs, Drones, and Refrains of Death were all born in the same year. These compositions were political, elegant, combative and powerful statements. In many ways, we’re all still reeling from the cultural revolution of that decade. But what happened during the last forty years? Who won the fight? And can we find answers in the music we now produce?

Let’s compare then with now. If we take a glance over the commissions for 2009’s BBC Proms, we’re greeted by the language of the defeated. This is especially true of the younger generation. Ben Foskett (born 1977), in response to a commission from the BBC Symphony Orchestra, produced a piece called From Trumpet. His title comes from the fact that in the original sketches his piece was to start with a trumpet solo and also because Foskett himself (and this is a touching biographical aspect of the score) actually plays the trumpet. Anna Meredith (born 1978), working with the Britten Sinfonia, produced Left Light. She says in the programme note: ‘the title came to me as I was using the idea of car indicators to help with one of the sections of the piece.’ The sheer inanity of the thought here is both shocking and disturbing. The writing in both of these pieces is skilled, refined and completely professional, and yet the music is without purpose, meaning or passion. How did we get here? It is tempting to think that the dull, apolitical and inconspicuous music that we produce as a society is due to the fact that conservatism won the war that began in the 1960s. But this is not the correct answer.

In a 1968 edition of Firing Line with William Buckley (the kind of open intellectual debate that no longer exists on television) novelist Norman Mailer, commenting on the strength of Churchillian and Gaullist opponents on the right, said that ‘the mark of a good conservative is that they’re bold’. When prompted by Buckley to offer a suggestion as to the mark of a good liberal, Mailer was instantly dismissive: ‘there’s no such thing as a good liberal. I can’t talk about liberals; I think they’re the agents of the technological society all over the world.’

Mailer saw the future, but he didn’t recognise it. The victors of the struggle in society were not, back in 1968, even seen as combatants. Over the next forty years or so the left and the right fought themselves to a standstill. Freedom and liberty, which both sides claimed as their own, were cast aside in favour of the machine that bears a multitude of names. Commerce, corporatism, internationalism, the global economy, competition, co-operation, the new world order; these are all used to signify a progressivist cultural movement that has effectively institutionalised power, and done so to benefit an elite that is not so much political, or even apolitical, as anti-political. The altruistic multi-billionaire, the consultancy firm, the big film studio, the merged and obese distribution company; not one has any interest in democracy, not one is accountable to anyone save its detached, avaricious shareholders.

And it is culture that has executed this movement. The liberal consensus has castrated the working artist to such an extent that to be radical or to be questioning means to be unemployed. Freedom now means to be cut adrift.

The result is the utilisation and control of culture itself whereby ideas and aims are censored in advance of their expression. Look at the short-listed projects for the Cultural Olympiad in Northern Ireland, announced last August. Some of the projects are exciting, no doubt, some less promising. But what they all bare is the trace of a background of prescription, of civil service box-ticking. ‘Rural’, ‘community’, ‘celebratory’, ‘diversity’; these words find their way from the policy documents to the artworks with surprising ease. The artworks are being written in advance by administrators for a particular purpose. The delivery of these pieces is taken on by skilled artisans or technicians, not thinkers. And because the place of the idea has moved from the artist to the administrator, the decision as to where the value lies in this exchange has changed accordingly.

In Northern Ireland in 2009 we have a situation in which composers can only expect to receive a tiny fraction of an average annual income through their craft. Arts administrators on the other hand receive handsome remuneration, double and treble the average composer’s income if they climb high in, for example, the Arts Council of Northern Ireland. The conclusion is clear: if you want to make a living in the arts you cannot be creative.

Is there any hope? In the spirit of 1968 I’d like to offer a Marxist interpretation of our current predicament.

In Capital, Marx outlined the following: that profit was determined by the amount of ‘surplus labour’ that a capitalist could squeeze from his workforce. ‘There is not one single atom of value that does not owe its existence to unpaid labour,’ he says. The drive to greater surplus labour leads to harder working conditions, mechanisation, an increasing estrangement between the workers and the objects they create and the growing immiseration of the workforce. Could there be parallels here in the case of the composer/arts establishment relationship? Clearly administrators profit from the production of music – they wouldn’t exist otherwise. Composers however do not profit from the production of music. In order to increase profit, composers have to produce more music in less time. If part of the process was mechanised, that is if they didn’t have to sit about thinking of the philosophical implications of what they are doing, if the results of the activity of composition were already decided by diktat, wouldn’t this increase the amount of unproblematic product to shift? And isn’t it the case that we see an increased sense of estrangement between the composer and her music?