The discourse around music serves only to divide us 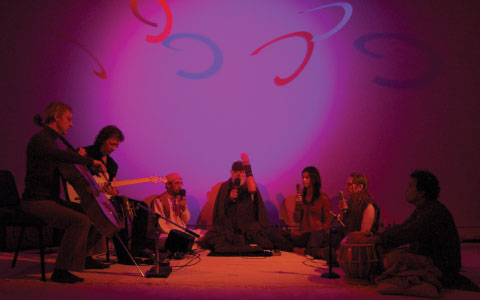 In the british writer David Lodge’s latest novel, Deaf Sentence, a fictional linguist remarks: ‘we live in discourse as fish live in water’, and continues, ‘…to understand culture and society you have to be able to analyse their discourses.’ His humorous cultural examples go as follows: ‘we eat discourse: mouth-watering menu-language for instance, like “flame-roasted peppers drizzled with truffle oil”; we drink discourse: “hints of tobacco, vanilla, chocolate and ripe berries in this feisty Australian Shiraz”; and we look at discourse’. After ‘we look at…’, his example is of minimalist visual art where the explanation of what the artist is up to is essential to even conceiving the proposed work as ‘art’.

Tom Wolfe’s 1975 polemic on art criticism, The Painted Word, gives a fuller examination of that issue. In his book Wolfe examines the removal of textual discourse from painting, a laudable(?) modernist desire to become free from symbol, allegory and narrative, as when the painter and sculptor Georges Braque argued: ‘The painter thinks in forms and colours. The aim is not to reconstitute an anecdotal fact but to constitute a pictorial fact.’ However, Wolfe goes on to point out that this statement was the start of a colossal ‘theory of abstraction’ that soon unleashed more and more words to support less and less paint. And, according to Wolfe, pretty soon it was the critics and curators who defined, with their words, what was or was not valid art. Certainly one can’t help having sympathy for this line of thought when confronted with yet another installation that consists of an empty gallery room containing a bulb or a brick and nothing else. The art begins when you read the idea behind it.

Traditionally, in music, there is less of an overt problem because at least in music history the role of symbol, allegory and narrative never took centre stage quite as it did with painting – though we too have extreme minimalism. However, there remains the basic problem of the potential dominance of discourse; there is a lot spoken or written about music, much of which goes unanalysed. There are radio commentaries, programme notes, newspaper and magazine reviews, CD booklet notes, previews and advertising, and specialist writing in the form of published books. In contemporary music, where frequently just getting to hear it is itself a problem, the beginner enthusiast will risk reading quite a lot about it, while not experiencing so much of it. For people in that position it is indeed necessary to ‘be able to analyse the discourse’. The first step is to remember that the work can only be experienced through itself, and not through any commentary, no matter how detailed. ‘Second-hand experience’ is an oxymoron! Secondly, it is worth considering that crossing from word to sound-experience entails a cognitive dissonance. Thirdly, texts have to be analysed to be really useful: categorised (by type, content and context), questioned (as to purpose or point of view) and digested.

In countries where the music education is limited or late, the young musician has to play catch-up, and so is on the look-out for short cuts: ‘what should I be hearing now and who can tell me about that?’ This turns out to take longer than directly listening/performing/composing, and brings the reader less near, in more time, to where he or she wanted to be. Wading through texts on music (s)he soon discovers there are more words than sounds. The words around and behind art music are legion and can be anecdotal, analytical, descriptive, illustrative or critical; they can be about the work, but also about the making of the work, the receiving of the work, the work’s context among other works, and so forth. And the most specialised writing can be so narrowly focused as to tell us nothing much; in academic discourse, if one is lucky, interesting questions are raised, but they are never answered.

The basic need to teach the next generation about the practice of music has always resulted in a technical language, which is itself rarely examined in full. It rapidly becomes a shorthand that can cause real experience to fall through the gaps. Also, once the technical language is up and running, it can end up pursuing its own word-bound logic while slightly forgetting how exactly it is meant to correspond with musical sound.

To illustrate this I will try to paraphrase what the composer Kevin Volans explained to me in the course of his teaching: when imparting musical information we use the names of notes – these quickly become, in our minds, divorced from the experience of the note. We say ‘A-flat’ – do we mean the A-flat on a flute or a violin? Does it even exist except as heard at a certain length, register, tonal strength, shape and colour? Or do we treat A-flat as an abstraction with a ‘discourse’ life of its own? This is important because the history of twentieth-century classical music can be divided into those two classes: the conceptual and the anti-conceptual. The conceptual composers assume the abstract properties of technical language, abstract it further, and then whip it up into a supreme technical procedure (these being the serialist composers whose technical armoury was vast and at times very recondite). The anti-conceptualists are those who, like Braque, are arranging and manipulating the concrete elements, sounds rather than symbols (Stravinsky, Feldman, Tenney, among others). The big guns of serialism and the Darmstadt school routinely buttressed their image with large tomes of theory and quasi-analysis, textual guides hoovered up earnestly by the following generation. Of course you can be sure that the anti-conceptualists have their own guidebooks (Meta + Hodos by Tenney, or Silence by Cage), and that a Wolfe-like fate awaits them too.

Contemporary music is known widely for its ‘difficulty’. Being itself often assembled in a complicated manner, most of the discourse around it, rather than forming a bridge to explain it to the public, is if anything more complicated. Ironically, the writing forms itself into a kind of ‘mood music’, instead of an elucidation. This tendency to use text to enhance the ambience, rather than to clarify, is precisely why discourse is dangerous and not trivial. After all it is the discourse (spoken and written) and its ambience that do most of the work in creating the separatism of musical tribes. It is usually argued by those unsympathetic to a sub-genre – for example, the extreme minimalism of La Monte Young – that the music exists in a subservient role to its own surrounding discourse. The verbal idea of the music reads compellingly, but the actual experience turns out to be less than what the build-up had you to expect. To say that the discourse is more impressive than the lived experience is, then, the ultimate cultural dismissal; while the aficionado will always defend by saying, ‘you missed the correct experience’.

The composer can be a superior source of comment on what it is (s)he is trying to achieve, particularly when (s)he sticks to describing sound, as with Stockhausen’s perfect explanation of what he meant by ‘moment-form’. But a particularly bad sub-genre of commentary tends to be the composer-penned programme note. Unlike the discourse on wine or food examples above, such notes hardly whet the appetite for music. The composer usually loses touch with what the reader is likely to get from the note; namely, the impression that the composer is showing off. And the average biographical note for a composer or performer is invariably more showing off. They are nearly always bloodless lists of outstanding achievements with no colour whatever. Together, these notes amount to scene-setting along the lines of: ‘I’m very clever, as is my music; it’ll be good for you even if you don’t understand it’.

One would think that the critic has the necessary distance to write something incisive and pertinent, but they are hampered most often by lack of expertise. Often, in a world premiere, the newspaper critic provides a redundant précis of the programme note or pre-concert talk – a discourse that digests a previous discourse – rather than say anything original or pertaining to the experience of the piece or its musical context. To be fair, they have problems also with time and space: they get very little in which to say anything at all, often managing to get just one thing properly off their chest, only to find that the rest of the concert has to be listed off perfunctorily, one adjective per piece.

Talking, reading or writing about music is never a substitute for doing it. One of the purposes of music is to silence the verbal monologue of thoughts that is in our heads the rest of the time. So go and listen to some music – don’t waste your time reading this.