A Way In to India

How can musicians from other cultures find a way in to Indian music? That was the challenge that faced Martin Hayes, Dennis Cahill and Matthew Noone when they recently travelled to India for a series of performances.

Irish musicians collaborate with artists from all over the world, but is it possible to find common ground between Irish traditional music and Indian classical music? In December 2014, that was the challenge that faced fiddler Martin Hayes, guitarist Dennis Cahill and myself (performing on sarode) when we travelled to India for a series of seven concerts. Our tour took in the major cities of New Delhi, Bangalore, Chennai and Mumbai, and three of these concerts were to feature collaborations with Indian artists.

Although many artists and scholars have been engaged by the idea that Irish traditional music – particularly the sean-nós tradition – is connected to non-European music – and while there have been various explorations and musical collaborations, from Seán Ó Riada’s Our Musical Heritage to Bob Quinn’s Atlantean films, and from Ronan Guilfoyle’s Khanda to Francesco Turrisi’s Tarab – Irish traditional music and Indian classical music are undeniably extremely different.

Irish traditional music has a beautiful yet relatively simple structure that relies upon the individual’s ability to subtly improvise and ornament a melody within cyclical repeats of that melody. Indian classical music, while it does work in cycles, is anything but simple. Rhythmically, it is framed in patterns called tala, which can range from a 3-beat cycle up to a 128-beat cycle, and with all sorts of wonderful deviations in between. These cycles, unlike the rhythms of Irish music, are not related to the melody as such and instead offer a framework for the extended melodic improvisation that is central to Indian classical music.

In New Delhi, we had a day of rehearsal with three exceptional young Indian classical musicians, Aditya Kalyanpur (tabla), Paras Nath (bansuri, the Indian wooden flute) and Utsav Lal (piano), and our tour concluded with a collaboration with these same musicians in Mumbai. In between, we performed in Bangalore, and also spent five days as artists-in-residence in Chennai.

Perhaps it was as a result of the dance origins of Irish melodies that meant the concept of rhythm provided the most difficulty in our collaborations. The Indian percussionists we worked with found it difficult to distinguish between different tunes, or the variations of the same tune, and often relied on verbal cues or counting the beat to know when to come in. Likewise, Martin and  Dennis found it difficult to count the tala or feel comfortable in the Indian rhythmic cycles and compositions. Consequently, they did not attempt to ‘jam’ within the Indian classical frame but rather tried to find a common ground of feeling from within their own repertoire of tunes.

The collaborations were also aided by Martin’s own interest and listening experience of Indian classical music. While living in the USA, Martin was exposed to the South Indian or Carnatic violin tradition, first through fusion group Shakti and later the more classical playing of Lakshminarayana Shankar and Lakshminarayana Subramaniam.

However, unlike Irish traditional music, fixed melodies are not the primary concern of Indian classical music. The main focus is the melodic aesthetic system of raga. It is almost impossible to define raga properly with words, yet put very simply it relates to a particular cluster of notes that is arranged and performed in such a way as to produce a particular emotional affect. A range of emotional states such as love, laughter, fury, compassion, disgust, horror, devotion, peace and wonder are said to be embodied within, and activated by, particular ragas. This concept of the essence or rasa of a raga draws on ancient Sanskrit texts that describe the purpose of the performing arts.

Furthermore, in rendering a raga, the singer or instrumentalist is required to improvise in ever increasing dexterity and complexity on all the subtle nuances of the bava or feeling of each melodic cluster. The melody is modal and a drone instrument is always used to establish a fixed tonic that does not change during the performance. Each raga usually has its own unique ascending and descending movement within the scale, strong notes that are to be played in the right proportion and weak notes that are to be avoided, and catch phrases that signify important characteristics of the raga’s personality. There are literally thousands of different ragas, predominantly sourcing their origins in antiquity, although a minority of ragas have been created by more contemporary master musicians. The performer and discerning Indian classical audience can usually identify a particular rag from the first few notes, or from one catch phrase, for even if the raga uses the same notes as another raga, it will have a different mood.

During our tour, in one particular collaboration with Professor Karaikudi Subramanian, performer of the veena (a large plucked lute with two large resonating gourds, and the oldest Indian classical string instrument) we had the chance to explore these complexities of Indian music. We spent five days in residence in his beautiful music institute called Bhraddvani in Chennai working towards a public performance. I have been studying Indian classical music for over a decade on the 25-stringed lute called sarode, but for Martin and Dennis it was a steep learning curve to attempt to engage with the full intricacies of raga and tala in just a few short days. While we enjoyed and respected each other’s music, it took hours of talking, listening, translation, negotiation and compromise to come up with something for a stage performance.

Chasing the Squirrel
In a strange twist of fate, through Cork/Chennai consultant Áine Edwards, we also met the great accordion player Tony MacMahon, who was at that time staying in India. It was perhaps through something of the heartfelt world of Irish music that Tony represents that we actually came to our most successful collaboration. Tony has been a regular visitor to India for many years, and through Áine had been introduced to Professor Subramanian and his school in Chennai. Tony had been very moved by the veena and Indian music in general and I had met him in Ireland at several Indian classical concerts. It was through these connections that I came to know of the Professor’s music and the original idea for an Irish–Indian collaboration began.

During our week of collaboration with the Professor, Martin and Dennis performed one evening for a group of children and parents. As a final piece, a lullaby for them as they went home, Martin played the tune ‘Chasing the Squirrel’, more commonly called ‘Hunting the Squirrel’. Although the tune is possibly of English origin, it has been transformed and subsumed by the processes of Irish traditional music. The mood or bava created by this piece was as instantly efficacious as that of any raga. The squirrel also represents an incarnation of love in the Hindu tradition and its three stripes are said to have come from the soft loving touch of the God Rama.

Out of all the melodies we had been attempting in our collaborations, this was the first one by which the Professor was immediately moved. He translated the melody into Indian notation called sargam (Sa, Re, Ga, ma, Pa, Dha, Ni, Sa), which resembles tonic solfa in the western tradition, and also wrote his own lyrics in Sanskrit based on the metaphysical symbolism of the squirrel. The resulting rendition, which is the final piece in Myles O’Reilly’s wonderful film, The Sound of a Country, was perhaps the highlight of the entire two-week tour. There is something about the combination of the Professor’s voice and the simplicity of the melody that captured the spirit of exploration that initiated the tour in the first place.

The piece begins with the resonating sound of the tambura, the four-stringed drone instrument that sets the tonic ground for the melody. The Professor then introduces the melody using his voice and the names of the Indian notes (Pa, Pa, Dha, Pa, Gha, Sa, Re, Ga, Re, Sa, Sa, Re, Ga, Re, Sa). On the second round of the melody Martin and Dennis join in while the Professor continues to sing and adds some simple notes on the veena. The piece continues to build as I join on the sarode for the third round of the tune using meend, the sliding ornaments of Indian classical music. For the final round of the melody the sarode begins to improvise somewhat over the continuing voice, fiddle and guitar and closes with the tonic note Sa and the ever-present tambura drone. In this version of the piece, the Professor does not sing the Sanskrit translation, although he has informed me of a performance after the tour where a group of children from his music academy sang this verse in a local temple.

While Irish and Indian music are, at their surface structures, worlds apart, it seems it is possible for musicians to enter into a deep communion that can transcend both complex philosophies and cultural differences, and sometimes all that is needed is the simplest of tunes.

The concert tour of India by Martin Hayes, Dennis Cahill and Matthew Noone was supported by Culture Ireland, and the Irish Embassy in New Delhi.

Watch the performance of ‘Chasing the Squirrel’ from Myles O’Reilly’s film The Sound of a Country (starts at 31:16):

Matthew Noone has studied North Indian classical music on sarode with Sougata Roy Chowdhury from Kolkata and K. Sridhar in the UK. He is currently undertaking a PhD through Arts Practice in the Irish World Academy of Music and Dance in the University of Limerick and is an Irish Research Council scholar. 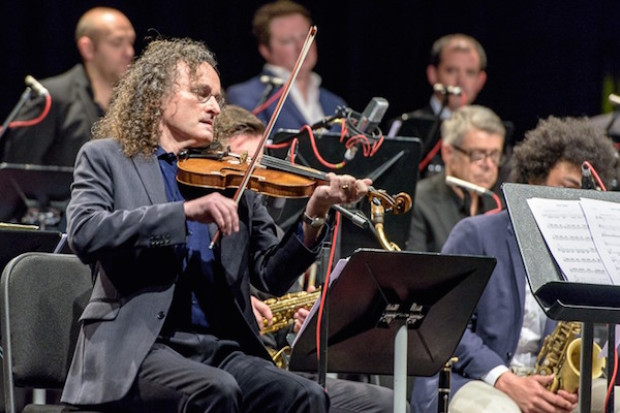 An Exchange in the Truest Sense
Don O'Mahony
The New Irish Jazz Orchestra directed by Paul Dunlea recently collaborated with fiddle-player Martin Hayes for a concert at the Curtis Auditorium in Cork (16 June). Don O'Mahony reviews. 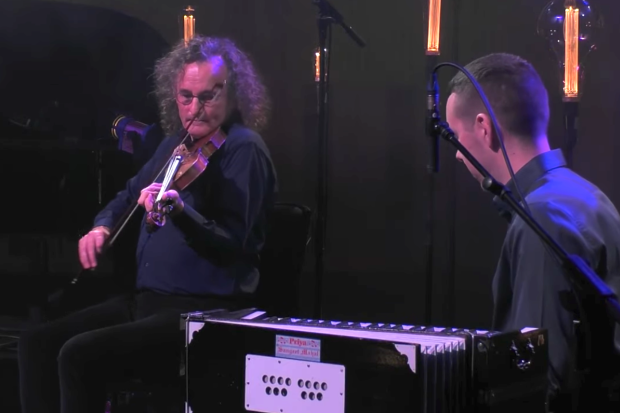