The evolving soundtrack of Ireland, Imagining Ireland showcases the most exciting creative artists at work today.

Femenine is a brilliant work of ecstatic intensity from the powerful voice of the black, queer artist Julius Eastman.

“The end sounds like the angels opening up heaven… Should we say euphoria?” Julius Eastman (1940-1990)

A new music composer, pianist, conductor, choreographer, and vocalist in the ‘70s, Eastman was a rare black, openly gay, working class presence within the world of classical music. Eastman challenged that world, putting both his blackness and gayness right up front in his music, titling works Gay Guerrilla, Crazy N*gger and N*gger F*ggot. He declared “What I am trying to achieve is to be what I am to the fullest: Black to the fullest, a musician to the fullest, a homosexual to the fullest.”

Eastman died in 1990 aged 49, officially of cardiac arrest, although it is suspected that AIDS and exhaustion brought on his collapse, at the time he had been homeless for nearly a decade. His death was not announced until it appeared in the Village Voice eight months later. He left behind few scores and recordings, and his music went all but forgotten for decades.

Femenine is created from just five pages of handwritten sketches. It is a piece full of surprise and optimism, with a sense of freedom and real-time communication between the musicians and listener.

Those who remember Femenine’s 1974 premiere performance say that Eastman appeared in a dress for the concert, and that they were served soup.

Performing this ground-breaking work is Crash Ensemble, Ireland’s leading new music ensemble; a group of world-class musicians who play the most adventurous, pioneering music of today.

Special guest Bulelani Mfaco offers a personal response to the piece. Growing up in the apartheid ghetto of Khayelitsha in Cape Town, Bulelani Mfaco became involved at an early age in protests for adequate housing & access to land with Abahlali BaseMjondolo, health care in the Khayelitsha Health Forum, and improved policing in neighbourhood watches. In 2017 he claimed asylum, seeking protection from violence and targeted killings of LGBT+ people. He is one of the Spokespersons at MASI – the Movement of Asylum Seekers in Ireland where he is campaigning for the right to work for all asylum seekers, and to end Direct Provision 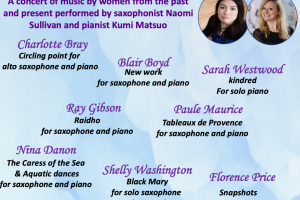 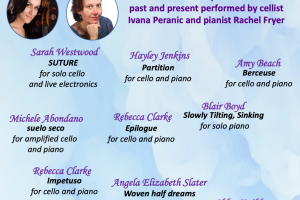