Hilary Woods’ Birthmarks has been a labor of intensity and intuition, written over the course of two years. Recorded whilst heavily pregnant between Galway and Oslo in the winter of 2019, Woods explores the oscillating and volatile processes of selfhood and becoming, hidden gestational growth, and the birthing of the Self, amidst continuous social and personal change.

Birthmarks is a record that hunts for ways in which to revisit and caress wounds left by the memory of their scars. In its mystery and attentiveness to the art of alchemy and the world of the unseen, it is a journey through textural fog and feral density that gives way to passages of voracious sonic exorcism and poetic healing. Its eight songs traverse planes of visceral physicality, stark tender space, and breathtaking introspective beauty.

Birthmarks, released in 2020, is the follow-up to Hilary Woods’ debut solo
album, Colt. While Colt was recorded on an 8-track in Woods’ home, Woods
worked with Norwegian producer Lasse Marhaug for Birthmarks, and the record
leans much more heavily into noise-based experimentation than its
predecessor, exploring deeply uncomfortable spaces through its engagement
with distressing soundscapes and field recordings.

The first half of the album bears more in common with Colt, though it is
darker, features less of Woods’ ambling piano melodies, and flirts with a
greater sense of atmosphere, while the bulk of the album’s experimentation,
which is what really sets it apart from its predecessor, is focused on the
first and the last four tracks.

The album opens with the tone-setting ‘Tongues of Wild Boar’ - lumbering
and ominous, occasionally reminiscent of Chelsea Wolfe's forays into
industrial and folk-influenced territory. Woods' voice feels almost
prophetic, and an oppressive cello is accompanied by a haunting and
surprisingly optimistic pairing of glockenspiel and vocal harmony - Colt
demonstrated Wood’s capacity to weave between cynical and optimistic tones,
and that ability is displayed once again in Birthmarks, though it is much
more subtle here.

‘Orange Tree’ and ‘Through the Dark, Love’ are both largely driven by
a pairing of guitar arpeggio and string accompaniment, with slow, evocative
vocals. ‘Orange Tree’ exudes an almost pagan folk atmosphere, while
‘Through the Dark, Love’ opens with a swell of noise hinting at what is
yet to come, before fading into an enchantingly eery pairing of guitar and
strings, later joined by a rambling piano melody that evokes Colt, before
building into a gentle ambience with dark undertones, and fading away.

‘Lay Bare’ marks the turning point for the album, a pleasant respite
before the intensity of the album’s final tracks. The piece opens with a
cello drone, joined by gentle vocals and the soft strumming of a guitar
accompanied by brushed drums. As the minimal melody and the overlapping
swells build up towards the track’s close, they lend it a sense of
spiritual revelation.

‘Mud and Stones’ opens with ambient atmosphere, horns and industrial
sounds, soon joined by a steady bass and a wall of whispers, a strange,
unsettling darkness that slowly gives way for a gentle synth before the
industrial swell fades and flows into the distorted waves and overwhelming
beat of ‘The Mouth’. Here, Woods' voice is warped almost beyond
comprehension - the track is a staggering enigma bordering on the edge of a
sensory overload, closing with erratic strings that eventually slip into
harmony.

‘Cleansing Ritual’ disrupts this moment of peace with a return to
synth-heavy, claustrophobic cacophony, slowly distorted into oblivion. The
middle of the track sees a sound like pizzicato strings in the distance,
rusted metal, and a failing fog horn emerge from the cacophony of the opening
in a form of controlled chaos reminiscent of a seaside apocalypse that slowly
fades into the album’s closing track, ‘There Is No Moon’.

‘There Is No Moon’ shakes off the overbearing noise of the previous
tracks, to finish the album with a somber piano, a single note plucked on a
string throughout, and whispered vocals rising here and falling there, ebbing
and flowing.

The album is deeply introspective, to the point that it can at times feel
cold and detached - here, Woods explores intimate themes we saw her engage
with in Colt, but Birthmarks is a much less warm and inviting affair. This
may put off some listeners - the album is certainly less accessible in its
instrumentation - but it makes it all the more rewarding to engage with. The
evocative peaks of the album are harder to see through the distortion, but
are made all the more beautiful for it. 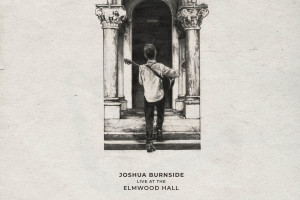 Album
24 May
Live at the Elmwood Hall
Joshua Burnside