Ireland's best-loved vocal band Ardú are releasing a new live album 11 December 2020. The album was recorded live for the City of Derry International Choir Festival at The Glassworks, Derry in October of this year and has now been remastered for general release.

Ardú Live features covers of music by Hozier, Muse and Elbow as well as a number of original arrangements by the Ardú artistic director Ciarán Kelly.

“2020 has been a challenging year for all musicians and group singing has been one of the worst affected areas. That said, as a musician and an artist, time is one of your most valuable assets. Having that space and time this year to really develop our sound as a group has been an exciting journey and it only feels right to us to culminate this year with our live album release.” - Ciarán Kelly, artistic director.

Ardú is an award-winning ensemble and a pioneer of contemporary vocal music in Ireland, have represented Ireland in international festivals in London, Finland, Croatia, Austria and Italy. Ardú performs regularly and high profile festivals in Ireland such as the City of Derry International Choir Festival (2020), MusicTown Festival (2020), K Fest (2019) and Cork International Choral Festival (2018). The group has featured on TV and radio including the Ray D’Arcy Show, BBC Proms in your Garden and Sing: Ultimate A Cappella on Sky One. Ardú supported American a cappella group Straight No Chaser at the National Concert Hall, Dublin in September 2019.

Ardú have also won many awards including first prize in the 2018 Choirs for Christmas competition on RTÉ Lyric FM and were runners up in the 2019 Contemporary A Cappella Recording Awards in the ‘Best Classical/Folk song’ category for their recording of Homeward Bound, arranged by Oliver Lambert. Ardú were also awarded the audience award at the 2019 Vokal.Total festival in Austria. 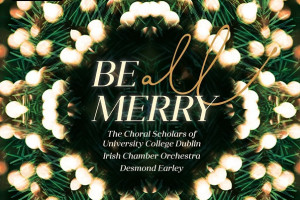