Founded in 1981, the Dublin-based Hibernian Orchestra (formerly the Hibernian Chamber Orchestra) is now recognised as the leading voluntary orchestra in Ireland.

The players come from a variety of backgrounds. As well as music teachers and students, the orchestra includes many pre-professionals, musicians pursuing other careers and, increasingly, players who were trained across the world and now reside and work in Ireland. What unites the members of the ensemble is their love of classical music and their commitment to the highest possible performance standards.

The orchestra performs in Dublin and across Ireland. Its repertoire stretches across the musical spectrum, ranging from early works to newly-commissioned pieces.

The list of artists who have performed with the Hibernian Orchestra is impressive and features many of Ireland’s most famous virtuosi, including Finghin Collins, Philip Martin, Catherine Leonard, Michael d'Arcy and Michael McHale. The orchestra is also committed to providing a platform for the next generation of soloists and has given early solo opportunities to many of Ireland’s most talented young musicians.

​​​​​​Presented by The Hibernian Orchestra
Sponsored by Dublin City Council 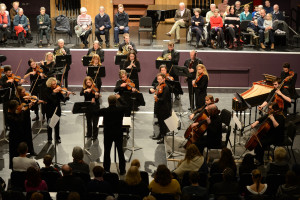