Caitlín Nic Gabhann in her home studio in Donegal

New Music Under Lockdown: Caitlín Nic Gabhann, Ger Wolfe and Amanda Feery on their Compositions for the Butterfly Sessions

In response to the pandemic, Music Network has commissioned 24 musicians and composers to write and perform new work to be streamed online over the next three months. The Journal of Music spoke to three of the commissioned artists.

It is only two weeks old, but the Butterfly Sessions online series is already proving to be an intriguing document of our time under lockdown because of the COVID-19 pandemic.

The series was announced by Music Network on 24 March. It was initially meant to feature 20 musicians and composers, but has now been expanded to 24. Each musician-composer, or a composer partnered with another musician, has been commissioned to write a piece of up to five minutes in duration to be performed from home and streamed on YouTube and social media. The pandemic not only sparked the series, but it is also influencing the work. The Butterfly Sessions began on 8 April with traditional music guitarist and singer John Doyle performing his new air ‘Alone Together’ and two reels, followed by pianist Carole Nelson’s ‘From Stillness Into Life’, then composer Peadar Ó Riada’s ‘A Kovid Butterfly’ and jazz guitarist Julien Colarossi’s ‘Sounds from My Room’, which he described as a ‘song of hope’.

Stillness
This week, concertina player Caitlín Nic Gabhann and singer-songwriter Ger Wolfe will each perform. Nic Gabhann has previously written tunes such as the barndance ‘Éigse an Spidéil’ and the waltz ‘Sunday’s Well’, both of which she has recorded, but this commission was a welcome opportunity to focus on composing again.

I’ve always written tunes, but not very consistently and over the last few years less and less. We were touring flat out for about five years and I was covering the admin and the management side. … I really have to have clear head space [for composing] but I was busy with the managerial side of being a musician, sitting at the computer, which is a lot of it, so I wasn’t giving myself the chance to have this clarity, this headspace. I was so delighted to get this commission… it gave me the focus and I’ve written more tunes since this commission came in.

Nic Gabhann’s tune, which she will perform on Wednesday 22 April at 7.30pm online, is a slow three-part march called ‘An Ciúnas’, which she interprets as not just ‘the quiet’ but also ‘the stillness’.

I was trying to put labels on how I was feeling and maybe how other people are feeling… fear, a bit of anxiety, fear of the unknown… we don’t know how long this is going to go on for … lonesomeness is a big part of it… I was really just channelling those feelings.

Someone’s called
Ger Wolfe, who has written classic songs such as ‘The Curra Road’ and ‘Heaven Paints Her Holy Mantle Blue’ will perform his two newly commissioned songs this Friday 24 April at 7.30pm. While the subject matter of the songs is wide-ranging, both are about coming out of a darker period.

When I sit down to write a song… something else could come out altogether even though I might start with a spark. [The two songs] are about recognition… In the first one, ‘Hello Gorgeous’… the first line is ‘Hello gorgeous, is this where you hide when winter cuts her old cold letters and the grass… ‘. It’s saying hello to things and goodbye to things… it’s about saying goodbye to sorrow. The last line is ‘Hello gorgeous, is this where you go when sunshine sends you playing in the tall, tall grass, summer’s come at last’. Basically it’s about hope. They are both about coming out of stuff that’s not really positive, but with hope.

The second song is called ‘Someone’s Called’ and begins ‘Someone’s called to give you words like “How are you?”, “Hello”…’. It’s also about coming out of isolation.

Wolfe writes regularly – ‘I’d be churning away at something every day usually,’ he says – and has now released seven albums. Last year he released the compilation Melody Bright and the Favourite Sparrow and is currently planning a new double-album called The Tide Clock / Clog na Taoide and will run a crowdfunding campaign soon. He can sense the influence of the pandemic on his songwriting: ‘It’s in the atmosphere… [the new songs] might sound frivolous but they’re not… they’re about people being isolated and loss…’.

The title for the Butterfly Sessions comes from the idea of cocooning. ‘Like a lot of other organisations,’ says Music Network Chief Executive Sharon Rollston, ‘we were thinking about ways we could develop new initiatives which could give much needed income to musicians under the current circumstances. Commissioning was an idea that we came up with early on in the conversations. … the Butterfly Sessions was a reaction to the word cocoon, so we went from cocoon to butterfly.’

Twenty seconds
Composer Amanda Feery is also one of the commissioned composers and has been paired with pianist Fiachra Garvey.

For her new work, which will be streamed in June, Feery has been influenced by the American composer Larry Polansky who wrote a series of very short pieces called ‘tooaytoods’. Each is between 7 and 13 seconds when recorded and consists of a single chord or a string of notes. She had already been thinking about composing a series of short piano improvisations, and being paired with Garvey for the commission fit the idea perfectly.

Feery plans to write 12 twenty- or thirty-second pieces for Garvey and feels the length is a good fit for these times and for her. ‘With twenty seconds, they can be completely different ideas and that’s fine. That’s what my head can manage at the moment.’ The concept of shorter pieces has always appealed to her, partly because she is influenced by the shorter format of the pop song. She recently premiered a new work inspired by Kate Bush’s song ‘Hounds of Love’ at the New Music Dublin festival. Writing in the Journal of Music, reviewer Adrian Smith said the piece ‘demonstrated an appetite for risk that set it apart… These kinds of pieces based on pop music don’t often work, but this one did and it had a moving nostalgia….’

Feery is conscious of the shorter duration aspect of her work.

I’ve kind of felt a bit weird about this over the years, and composition teachers that I’ve come across have definitely commented on it, but I’ve come to accept that I’m probably an eight-minuter in terms of pieces I write…. I’m probably more influenced by the song format…

The idea for the 12 twenty-second pieces also came from the advice that was circulating on the internet regarding how long to spend washing your hands (20 seconds), and the guideline diagrams containing twelve images. ‘I’d have a piece for each of those pictures,’ she says.  ‘That might make good cover art.’ 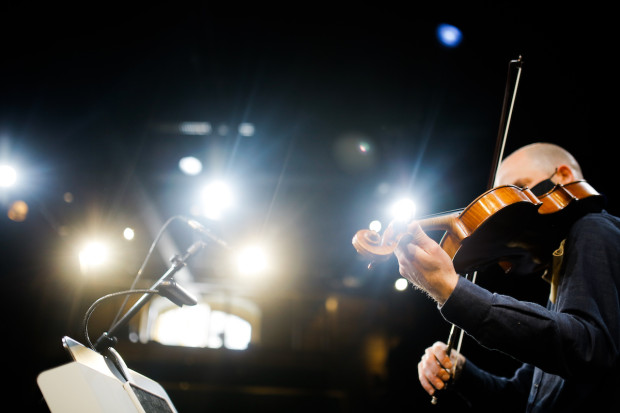