There’s a particular sensation when climbing the hill towards St Peter’s Church of Ireland for the contemporary music concert that takes place as part of Drogheda Arts Festival. It’s the May bank holiday, the first weekend evening that really feels like summer, still bright, and almost warm, in the lull between shops closing and pubs getting busy. There’s a private, almost tactile anticipation, as punters make their way up in ones and twos and threes; it feels like the only thing happening in the world.

The concert, organised by Louth Contemporary Music Society, has hosted an array of international composers and performers through the years, and brought world premières by artists as diverse as Arvo Pärt and James Dillon, as well as works by John Luther Adams and Sofia Gubaidulina.

This year featured three related works by one composer, the Canadian Nicole Lizée, all performed on piano (along with a handful of props) by her collaborator Megumi Masaki. Each one is named for a famous director – the Kubrick Études, the Hitchcock Études, and the world première of the Spielberg Études – and each is built on film segments by that director, cut and spliced and remixed, and projected onto a screen above the piano. 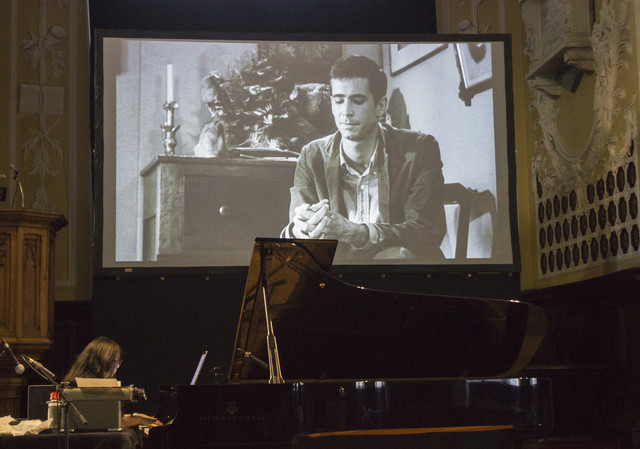 Magnifying amd exaggerating
The works are études on several levels: they’re challenging technical piano pieces, and compositional studies in arranging and adapting music based on the existing sound, including the scores of Bernard Herrmann and John Williams. Visually, they’re studies of the films that form their bases, magnifying and exaggerating small details and connections: background lights are brightened and coloured to the point of psychedelia; separate violent outbursts from A Clockwork Orange are spliced together. Each work is continuous, though somewhat episodic, with the piano parts making much of dance music-like loops under more abstract melodies emphasising or accompanying or interjecting into the sound and music that is coming from the films.

The Kubrick Études are the most narrative and the darkest of the three, taking us inside the minds of Kubrick’s troubled heroes. Notably, the music in this work does not draw primarily on the classical works Kubrick used as soundtracks – the Rossini, Ligeti, and Johann and Richard Strauss which accompanied some of his most famous scenes. Rather his sound design is the central influence; Lizée adds a funeral march chord progression as HAL 9000 says ‘My mind is going’, and piano interjections under Danny Torrance riding a trike around the Overlook Hotel.

The Spielberg Études mainly uses three films: Close Encounters of the Third Kind, E.T., and Jaws, as well as a piece of footage that recently did the rounds on Twitter, of Spielberg and Williams developing the score for a scene in E.T. The spirit is lighter, though still trippy: it begins with an alien visitation, and, at numerous points, the image on screen is literally peeled back like the foil on a tub of ice cream to reveal some sort of dessert beneath. This work leaned the most heavily on props, including a can of compressed air and some lengths of plastic tubing (a nod to Spielberg’s preference for analogue special effects). Masaki’s own voice dominated in the incongruous close, singing gently over bright open fifths as, onscreen, a girl is pulled underwater in an early scene from Jaws.

The Hitchcock Études were the most effective of the evening, laced through again with a puckish sense of humour: like Hitchcock did, Lizée takes cameos on screen, inserting herself into the film footage to sit alongside Doris Day and Tippi Hedren. The Études begin with the opening credits of Psycho; Herrmann’s score and Saul Bass’ credit sequence, already fractured and jagged, suit Lizée’s scissors-and-glue style. Later, Anthony Perkins’ anxious, halting voice creates the basis for an anxious, halting melody, and the last ‘meow meow’ of the children’s song from The Birds devolves into a sinister, haunting tune.

Typewriter duet
Screens draw the eye, and the films projected above the piano in these works, from which the sound derived, dominated the attention share of the concert. But they are performative works, and, even though I frequently found my attention drawn away from the performer, the experience was quite different from watching a recording of the same works. The interaction between piano and sound, between pianist and screen, was central, whether she was playing a passage of rapidly repeated notes as the lights above her changed, or in a typewriter duet with Jack Nicholson. (It’s a Kubrickian detail that the typewriter Masaki used was the same model as the one on screen.)

The Drogheda Arts Festival contemporary music concert is, for me, fast becoming the marker of the beginning of summer, as well as an appetiser for the Louth Contemporary Music Festival in June. For a combination of intimacy and ambition and surprise, it’s the only show in town.

Louth Contemporary Music Society’s next event, Stations of the Sun, which will be attended by composer Kaija Saariaho on her first visit to Ireland, takes place on 21–22 June. For more, see www.louthcms.org.