Tradition in the Making

Raelach Records is an independent record company run by concertina player Jack Talty. To date, Raelach has produced 15 albums from a diverse range of artists – legendary traditional musicians Tony MacMahon and Noel Hill, sean-nós singer Saileog Ní Cheannabháin, and more experimental music such as that of jazz-trad group Ensemble Ériu and the explorations across Indian classical and Irish traditional music of An Tara.

In March, Raelach hosted their second showcase concert in the Black Gate venue in Galway. These concerts are an opportunity for audiences to hear the label’s artists live – on this occasion, fiddle-player Claire Egan and accordionist Conor Connolly. Egan recorded her album Turning Tides with Raelach in 2015. Connolly, the 2019 TG4 Gradam Ceoil Young Musician of the Year, is currently working on a recording for the label. Both artists were accompanied on traditional Greek bouzouki by Mick Connelly, who also appears on Egan’s CD.

Turning Tides
Egan’s album features interpretations of well-known traditional pieces as well as new compositions such as her own waltz ‘Turning Tides’. Her deep traditional roots are demonstrated by versions of tunes such as the slow air ‘The Dark Haired Woman’, which she also performed at the Black Gate. With her choice of ornamentation and her use of double stops, chords and open strings as a drone-like effect, Egan recreated a soundscape reminiscent of whistling winds and mountainous landscapes. Her training as a classical violinist, evident in her technical skill, gives her an extraordinary control of the instrument. On her album, classical and Irish traditions come together in her performance of the Adagio from Bach’s Sonata in G minor out of which she impeccably transitions into the popular reel ‘Castlekelly’s’.

In this concert, with her rendition of the popular jig ‘The Battering Ram’, Egan further demonstrated her use of articulation and phrasing. With every repetition, she slightly changed the internal rhythmical subdivisions of the melody, varying phrases each time by starting on a different note. This, combined with a rich yet understated use of ornamentation, led to a fresh interpretation of the tune. Interestingly, Egan is currently pursuing a practice-based PhD at the University of Limerick in which she explores the art of phrasing in traditional fiddle-playing.

Range of inspirations
Connolly opened with a set of jigs, ‘Mike Carney’s’, an unusual three-part tune (also known as ‘Tom Busby’s’) and ‘Darby the Driver’. He continued with a set of common reels followed by a haunting performance of the Scottish slow air ‘Dark Lochnagar’, which he learned from a recording of piper Willie Clancy. Connolly adapted the tune to the accordion in an expert way, his balanced used of vibrato and harmonisation particularly captivating. Later in the concert, Connolly revealed his skills as a singer too with a rendition of the song ‘The Banks of the Nile’, popularised by Spiddal singer Tom Pháidín Tom on the De Danann album The Mist Covered Mountain.

One striking feature of Connolly’s playing is his interesting chord choices and use of bass. As he explained in his introductions to tunes, his repertoire and technique are informed by early recordings of Irish traditional music, in particular pipers, like his version of ‘Strike the Gay Harp’, learned from a 1930s recording in the Irish Traditional Music Archive, or ‘An Buachaillín Dreoite’, which he learned from a recording of piper Jimmy O’Brien Moran. It is perhaps this range of inspirations that gives Connolly’s music such style.

Breathing new life into well-known melodies can be a difficult task, but both musicians managed to do it in a fascinating way, Egan with her articulated interpretations of ‘Scatter the Mud’ or ‘The Pigeon on the Gate’ and Connolly with his rhythmic renditions of ‘The Sailor on the Rock’ or ‘Drowsy Maggie’. This is tradition in the making.

Since the concert, I have had Egan’s CD on repeat and it is one of those albums that reveals new layers of interpretation, interesting harmonic ideas and melodic variations with each listen. I am looking forward to Connolly’s future project with Raelach. The Black Gate, with its decorations, drinks and food created a continental atmosphere that matched Irish traditional music very well, although it is not usually associated with it, at least not in the west of Ireland.

This concert took place on 15 March. Raelach Records will host the launch of their latest album, Dúchas by accordionist Damien O’Reilly, at the Black Gate on Friday 7 June. For more, visit www.raelachrecords.com.

This is the third review published as part of  the Journal of Music/Galway City and County Music Writer Mentoring Scheme 2019 and is supported by Galway City Council and Galway County Council Arts Offices. Over the course of the year, the editorial team of the Journal of Music will work with six new writers – Rachel Deckard, Massimo Cattaneo, Jake Tiernan and Kerri Haberlin (Galway city) and  James Fleming and Tara Broderick (Galway county) – and publish their reviews of music in Galway. 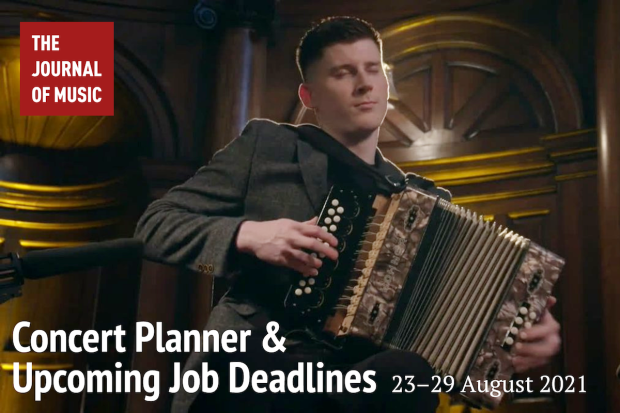